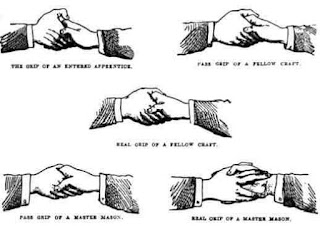 When I was a kid, we played outside. Especially in the woods. We built forts. We formed clubs, the main purpose of which was to exclude others. We tried to become "blood sisters" but lost our nerve when we actually got ahold of a razor blade. We invented secret societies but they were so secret that we quickly forgot what we/they were about. We talked about secret handshakes but never quite figured out how or why to do it. But -- oh! -- how I wished I could be part of a secret society!

Then I grew up. And read The DaVinci Code. And that need almost went away. Almost. It went back to dormancy.

Then, when I would have least expected, came the invitation -- a real invitation -- to join a secret society!!!! This was back in December of 2014. I was thrilled. Not just by the realization of my long-held dream, but by the nature of the society itself! Shall I tell you more?

I shall. But just a bit. The Full Reveal comes in a few weeks.

My blog buddy Julie, made a quilt a few years back. It was a masterpiece of a quilt. It was called "See Rock City" and was composed of a dozen free-pieced barns. And a couple of years ago, I saw it, up close and personal. I thought it was just spectacular. Apparently lots of other folks thought so too, because Julie ended up with a book offer!

And that's where the invitation came from. Because it seemed that Julie needed a dozen or so diverse beings who would be willing to read her directions for free-piecing barns, and attempt it for themselves. And so the Secret Society of Barn Builders was formed. We worked together-but-separately for six months, sharing ideas, input, and -- of course -- fabric. Some of us had free-pieced previously; I was a total newbie and at times wondered just what I had gotten myself into.  But Joe and the SSOBB members cheered me on, and in due time I had actually built a barn!

Now, I imagine you think I am being a great big tease for telling you this much and not sharing my barn. But my purpose was to whet your appetite. Take a minute and scroll down my blog until you see the SSOBB logo, and click on it, why don't you? That will take you to the book's web page. Publication is coming up soon, and after that I'll be back with a picture of my barn and more of the story.

Meanwhile, the SSOBB continues. We don't have regular meetings and we don't wear distinctive funny hats. In fact, most of us have never met in person. Therefore, we've made zero progress on developing a secret handshake. (I knew you were wondering about that.) But there's a great likelihood that our barns will appear together at a show sometime later this year, and won't it be fun if some of us get to meet up?

Can't wait to see your barn!

Barbara Anne said…
Cheers for Julie's amazing See Rock City quilt, the book that's due out next month, and the SSOBB who have bravely built the needed barns by Julie's instructions!! What FUN!

Seriously, Nancy, have you written any books yourself? You are a spectacular storyteller.

suz said…
how exciting! I've never done freestyle sewing either. I'll be looking forward to seeing your barn. Too bad about the secret handshake, but I hope you have a secret password!
Monday, March 28, 2016 10:43:00 AM