Dry, With a Chance of Rhubarb 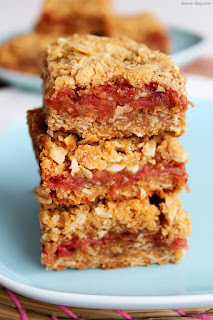 For a good many years now, I've pretty much been able to look at a recipe and know whether it will be good. I can't always tell if it will be spectacular, you know, but whether we will like it.

Now you can already tell how this post is going to end.

Two weeks ago, I went to Whole Paycheck for something I couldn't get at my little family-run regular grocery store. And while I was there, I saw that they had rhubarb! The first of the season! So I bought a whole lot of it, stewed it up, shared some with my sister, and pieced on it the rest of the week. It was great over vanilla yogurt. It was awfully nice over cottage cheese. It was terrific just out of a little dish all by itself. It would have been lovely over pound cake, if I had some, but I didn't. So a week later I went back; they were all out and I was told to come back in a couple of days.

So a couple of days later, I went back. And they still didn't have any. By this point I was nearly drooling in anticipation (I know. Rhubarb doesn't have a really big following. But we are passionate.). As I attempted to exit through the entrance (I was that dismayed) I literally bumped into a nice couple I know from church. They said they were there for onions. "Good luck with that," I told them. "I came for rhubarb. And they're out." "Oh," replied the Mrs. "We have rhubarb. I'll be glad to give you some. In fact, we have rhubarb plants that are ready to split, so we can give you a whole plant."

I felt as though I'd just won the lottery. Except I hadn't bought a ticket. And it had never occurred to me that rhubarb could be grown at home in one's very own garden.

The next day, I visited the Mrs. and picked up a generous offering of rhubarb. And later today, Himself is scheduled to go over and dig up the plant that was so kindly offered.

With the red-and-green bounty on the kitchen counter, filled with possibilities, I approached Pinterest thinking it was definitely time to branch out from the only way I'd ever had rhubarb, stewed. I downloaded three recipes.

First up was Rhubarb Oatmeal Squares. The picture above is from the blog of the recipe's creator, and not from my kitchen counter. Far from it. I followed the directions precisely. I noted that the writer cautioned against over-filling the two layers of oatmeal-brown sugar-butter mixture, even saying that any filling in excess of 1-1/2 cups should be saved for another use. But when the filling was spread, it looked a bit thin.

It seemed to take forever for the treat to cool enough to eat it. And it appears I was wrong. I cannot always tell if a recipe is going to be good. These squares were very hard. And very dry. And overly abundant in their oatmealness and beyond skimpy in their rhubarbarity (don't try to use these words in your Scrabble game).

We're nearly through the 9" square pan of rhubarb oatmeal bars, a once-in-a-lifetime experience in this house. We've served them with ice cream, cut up and doused with milk, and this morning even with a portion of clotted cream that arrived yesterday from Harry and David along with some utterly gorgeous strawberries.

But I digress. And that's fine because I'm heading out to the kitchen to approach the next portion of fresh rhubarb. A cake is about to be made. And the recipe sounds really good.
Email Post
Labels: Food

Margie said…
I’ve grown up with rhubarb in the Rocky Mountains and like it. A few years ago my California grandson was here during the season. He went home and asked his mom, “Why didn’t you tell me about rhubarb?” If they can find it in California it is expensive. Now a family joke. Right now I have tons.
Sunday, May 13, 2018 6:36:00 PM

Quiltdivajulie said…
I've had that same knack of recognizing a "good" recipe when I see it. But of late, I've been fooled (disappointed) more often than I like (and all of those recipes came from Pinterest links). Glad you found a source for your rhubarb and are getting a plant or two of your own!
Sunday, May 13, 2018 8:29:00 PM

Barbara Anne said…
How wonderful that your kind friends from church "happened" to be at the store for onions when you were there and offered you some of their rhubarb. Methinks that is a lovely little personal miracle of timing on a cosmic level just for you and your sweetie. This week you'll have your own rhubarb plant, too!

You may have my share of rhubarb as no one in this family likes it at all!

Tanya said…
I love rhubarb too but my farmer source (and it is almost impossible to find in Japan) had it die out on him last year. MO MORE RHUBARB! My farmer friend and I are both looking for someone who has plants they are willing to split.
Monday, May 14, 2018 8:11:00 AM

Bridget said…
I have a plant from my mother's garden, which came from her grandmother's garden. I didn't know you could kill the stuff ;) I am hoping there will be a piece of strawberry rhubarb pie left in the fridge when I get home. My husband also loves rhubarb and we are passing the love on to our small children. My favorite is the shortcake crust with a layer of rhubarb followed with a top of meringue. Lovely with tea. I must get the recipe from my sister...
Monday, May 14, 2018 4:56:00 PM

Janet O. said…
So disappointing when your mouth waters for that first delicious bite--only to discover it "ain't" so delicious!
We grew rhubarb as I was growing up. I remember we (the children) used to get it wet so we could sprinkle salt on it and it would stick. Then we would eat it raw. Makes me cringe now to think about it. My MIL grew rhubarb and rhubarb crisp with fresh, homemade vanilla ice cream was the family favorite.
Tuesday, May 15, 2018 11:21:00 AM

Lynn Dykstra said…
I grew up having no idea you could buy rhubarb--there was always plenty in the garden.
I have a nice harvest from my sister that will be made into rhubarb dessert tomorrow.
My garden at our house had two enormous plants. I miss them!

Millie said…
You'll enjoy having it in your garden. It is ridiculously easy to grow. Give it a good spot and it'll reward you for many years to come. I have some in my garden and it is a real treat to see it come forth every year.
Thursday, May 24, 2018 7:54:00 AM