Off to Boot Camp 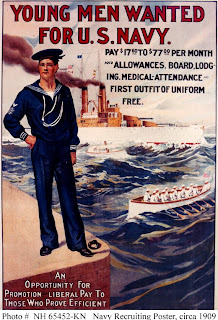 Joe left for boot camp the first week in October.  He was due home just a week or two before Christmas.  Early in December, he phoned.  It seemed that the Navy recruiter hadn't been entirely truthful about what he'd offered Joe.  There was no guarantee of an illustrator-draftsman position, and, in fact, there were only 300 such billets in the entire Navy!  There was one vacancy and if Joe wanted to be considered for it, he had to waive the Class A school he was entitled to and compete with everyone else who wanted that spot.  If he was not selected, he'd be sent to corpsman school and immediately go to 'Nam as a medic supporting the Marines.  And he'd have to stay in boot camp an extra week before he would find out.

It was a very long week.

Finally another phone call came.  He'd be home for Christmas, and with about three days to spare!  And he'd received the illustrator-draftsman position!   The shore duty part had turned out to be true!  He'd been assigned to Pensacola, Florida, for a year, and was due to report the first week in January! 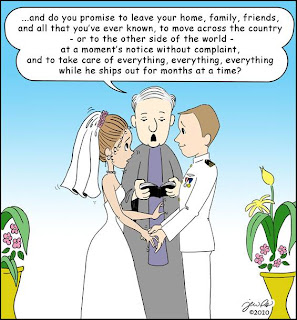 Judi said…
I'm loving reading this! Will we get to hear about your year in Florida?

Thank you for sharing!

Nancy said…
OMG...we lived the same story only in 71.. Hubby went to corps school, but then had to sign up for an additional 6 months in order to get pharmacy tech school and THEN apply for it.. we kept our fingers crossed and he got it..

altar ego said…
Belated congratulations to you and yours! It's always a joy to hear stories of couples who continue to enjoy being together. So glad the illustrator-draftsman position worked out, especially. How different life might have been otherwise!
Thursday, July 22, 2010 9:36:00 AM

Anonymous said…
The cartoon is so true. We moved up our wedding from 4 years to 3 months for a chance of a lifetime to be sent to Germany w/the Air Force. Turns out the orders did not quite match the expected and we ended up at Beale AFB in Marysville, CA but definitely provided a career in the private sector that provided our living until retirement. It was meant to be - God's plan, not ours. CA cuz
Thursday, July 22, 2010 12:21:00 PM