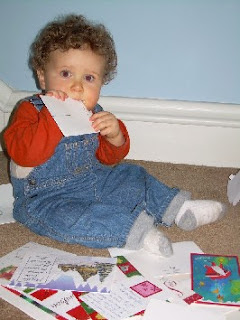 When we were at Sherry's recently, we noticed that she had a basket at the foot of the steps and it held the Christmas cards that they had received. After a period of intense activity, Sam crawled over to the basket and began "reading" the cards. He'd spend a surprisingly long time with many of the cards; others he'd discard almost immediately. Joe's theory was that this calm activity was a means of catching his breath before pressing on to terrorize the cat.
. . . .
Took me back in time to something I've not thought of in more than fifty years (ye gods, did I really write that?).
. . . .
Nana, my paternal grandmother, lived alone in a row house that was within walking distance of the house where I spent my first four years in the West Oak Lane section of Philadelphia. Despite the proximity, I don't remember being at her house on a regular basis. It was always more of an occasion to be there. When we moved outside of the city to Near Philadelphia, these visits were even more occasional, and before very long Nana gave up her house and moved in with Aunt Helen.
. . . .
The thing I remember best about going to Nana's is that down in her basement (but it was called the cellar), she had an actual sandbox. It was not very big and it was not fancy at all. It contained New Jersey beach sand, rather than the commercial kind of sand in most kiddy sandboxes. And there were discarded kitchen findings there -- measuring cups, spoons, sifters, those kinds of things. While the adults were visiting and getting a meal on the table, I was allowed to go down there to cook and bake. It was magical.
. . . .
The other thing, though, the newly reclaimed memory, is that somewhere in the living room, Nana had some kind of a box where she kept greeting cards that she had received. And now I remember very vividly that after dinner, I would be allowed to go and get that box out, and go through the cards. This was all before I could read, and it felt like such a special privilege to be able to do this. I just loved it.
. . . .
Our Christmas cards are in a basket in the living room still. Last week I put my birthday greetings in there, too. And somewhere in the closet is just the right box -- it is pale blue, and is made like a round hatbox with a ribbon -- it came from Elaine for a birthday about seven or eight years ago. It will be perfect for holding the cards for Sam's perusal when he comes to visit Nana. 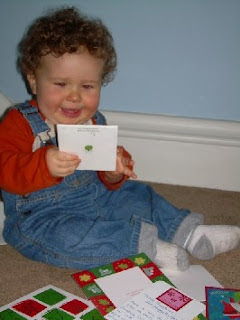 Samantha said…
First off- he is adorable!!

Patti said…
Sam is certainly a sweetie! He has a head of curly hair just like my husband did in his little boy pictures. It was a big fuzzy brillo pad in the 70's, but now there is almost as much skin as there is curly hair. :-)
Tuesday, February 13, 2007 1:44:00 PM

Mrs. Goodneedle said…
I can't stand it, just too much cuteness all in one little package. He is absolutely precious! Love your idea borrowed from yuour Nana... Sam needs a "Picture Play" quilt too, Nancy. I may be able to spare a few novelties ;) you just let me know.
Tuesday, February 13, 2007 2:14:00 PM

graceamazes said…
Meant to respond to the first birthday pix...

Sam is such a cutie pie! Love the red curls! And he's getting so big! I remember carrying him around until he fell asleep when we were all at your house for some (now forgotten) gathering. (Maybe 4th of July?) Guess those days are gone...

And I think some relative in my ancient past had old cards sitting around too. I vaguely remember seeing them made into boxes. Odd, disjointed almost-a-memory...

Bonnie said…
I remember that box of cards, too. But there was also a deck of cards -- playing cards which, in a Methodist household, was a forbidden item. I'm glad Nana broke the rules.
(She also had a player piano with many piano rolls, but I never got the Piano Roll Blues at her house.)

Pam said…
That is a good idea to put all the cards in one basket to be out and enjoyed all year.

My grandparents had a sandbox in their cellar as well. It was a little root cellar and the box of sand was about 6 feet square and 3 feet deep and it was used to store the carrots, potatoes, and beets etc. over the winter. We used to dig through it for carrots.
Wednesday, February 14, 2007 2:09:00 PM