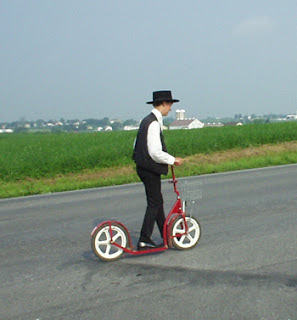 Our weekend at White Oak was so nice. There were only nine of us, but we were such a compatible group. The weather was unseasonably warm, and in addition to the buggies, I saw a lot of Amish people using their scooters on Route 30. I still wasn't feeling one hundred percent, so I timed my travel in order to arrive at White Oak in time for a nap. Which was wonderful. I woke to find that Bonnie, Ruth and Hisa had arrived and the wine and cheese were ready for consumption. In short order everyone else came in, most of them already laden with bags from Sauder's, Zook's, and Old Country Store. Uncharacteristically, I bought absolutely no fabric, no patterns, no nothing -- do you need further evidence that I wasn't feeling totally well?

After Carol's delicious dinner, we had a little celebration for Ruth, who has just bought her first home. And then we got to sewing.

I had brought seven completed Stack and Whack blocks and cut components for five more. By Saturday at dinner time, the blocks were all done and the top was latticed and bordered! I was delighted!

After dinner, I took out all of my Time Began in a Garden blocks and began trimming them to size. Sunday morning I got all thirteen blocks sewn together. The pattern, as you an see here, calls for embroidery stitching around each of the blocks and around the outside. The White Oak revelers, never at a loss for an opinion, were very firm that this was not what I wanted to do. They proclaimed that my finished top looked like a garden, and that separating the blocks with embroidery would take away from that look. I agreed. So I put a plain black two-inch border around the outside and called it good.

When I got home I went to Hancock's on line and ordered backing for both pieces; they'll be going off to Kat for machine quilting on November 1!
Email Post
Labels: Retreat

Juliann in WA said…
I bet it looks great without the embroidery too. Can't wait to see the finished quilt. Now you get to think about your round robin block!
Monday, October 22, 2007 9:59:00 AM