Aunt Helen Would SO Approve 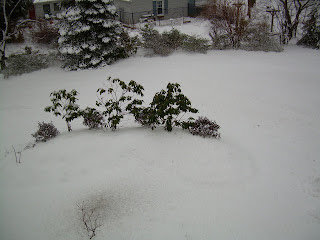 I don't have any idea why I got to thinking about my Aunt Helen this morning while I was puttering around. She's been gone for so long; I'm thinking it has been more than 30 years. I know she never got to meet our older son, Tom, who has the same name as her late brother, my father. She was one terrific aunt, one of those people who even on the hottest summer day looked like she'd just stepped out of the shower. She favored dresses (especially green ones) over shorts and was frequently seen wearing pearls. Her fragrance was "Emeraude" by Coty and to this day I can't have a whiff of it without believing she is somewhere behind me. She was given to idiosyncratic speech; she called her girlfriends "kid," and one of her most frequent lines, used to express astonishment or surprise, was "Golly day!" The expression I loved the most was used as an emphatic affirmative: "I hope to tell you!"

Anyway, I was thinking about Aunt Helen this morning when we finally got our long-awaited snow day. I literally sprang out of bed when the phone rang at 5:28 to start the snow chain. I had great plans for the day. 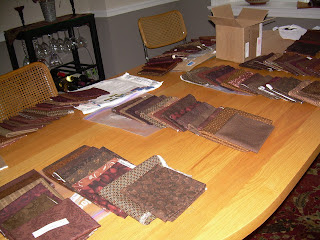 One of the things I did was swap out some fat quarters. In my alleged spare time, I run a small swap list. There are about thirty members and we do three or four swaps each year. Some swaps are fat quarters according to a specific fabric line or color scheme. Other swaps are blocks -- sometimes pieced, sometimes appliqued.

Recently I found I'd become enamored of brown fabrics. Not brown prints or brown solids, particularly, but the kind of brown that "reads solid" from a squint but when you look at it without the squint, you see that it is a nice, interesting brown. I bought a few fat quarters and wanted more. Didn't see too many more that spoke to me, but I knew what to do. I organized a FQ swap called "What Can Brown Do For You?" and the last of the packets of fabric arrived a couple of days ago. I spent a happy fifteen minutes swapping them out, and then set my own pile aside for future fondling while I determine a project. 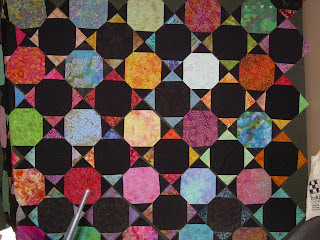 Another recent swap came to a close this week, too, and seeing as how it was Snowball blocks, it was appropriate that I would swap them out today as well. The idea for the swap had come from dear Nicole. Go to her blog and locate her post of September 18 called "Missing in Action." Yes, it will take you a couple of minutes but -- trust me -- it is worth it. Doncha just love those Snowball blocks? What she's done is alternated light and dark ones in diagonal rows and then added corners to her setting triangles. So simple. So gorgeous. My eyes went from Nicole's blog to the pile of batiks festering in one corner of the sewing room. Batik and black Snowballs, I thought. That could be spectacular. I put out an announcement and a major snowball fight began almost immediately! The Snowballs came hurling in, some from as far as Canterbury, England; others from right here Near Philadelphia. Swapping them out took a little longer than I'd planned, but once it was done, I couldn't wait to get them up on the wall. Ask me --go ahead --ask me if I like the way they look.

"Kid, I hope to tell you!"
Email Post
Labels: Family

Nicole said…
WOW! Your snowball quilt top is incredible! And how different it is in appearance from the one I did. Isn't fabric just the most amazing art medium? I am intriqued with your fat quarter swaps. The brown idea is so great--it is a neglected color I think. My mind is whirling with ideas for brown quilts now.
Finally, thank you for sharing about your Aunt Helen. She sounds very cool. I remember Coty's Emeraude. The ads always had a sultry brunette wearing emerald green. You made me think of my paternal grandmother. She always wore floaty dresses and used talcum powder so she smelled cozy. She thought I should learn to read at an early age and speak French!
Saturday, February 23, 2008 12:40:00 PM

Anonymous said…
HI - I'm the swapper from chilly Canterbury UK currently in hot and sunny NSW Australia. The blocks look wonderful. The on point setting gives a different look and I'll consider it for mine. I made lots of extras so may make 2 smaller qults.
Mary from Canterbury UK
Saturday, February 23, 2008 6:57:00 PM

Laurie Ann said…
Sounds like a fun lady. Oh, that we would all be remembered with such precision and frequency 30 years after our demise!
Monday, February 25, 2008 11:39:00 AM

Mrs. Goodneedle said…
I had an Aunt Helen, too. Not nearly as much fun as yours, I hope to tell you. I'm happy that you've finally had YOUR day; it's been a long time coming. The "Snowball" quilt layout is wonderful, but then, you know that!
Monday, February 25, 2008 5:09:00 PM

We had snow overnight and I'm happily working on all kinds of little odds and ends in my sewing room, looking out the big window at the bright sunlight highlighting the blanket of snow.