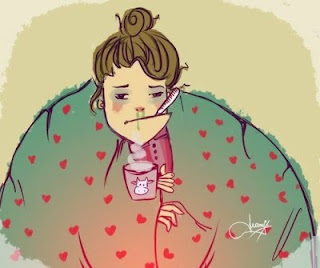 It struck a week ago. On Tuesday, I wasn't feeling 100% and since we had dinner guests coming, I left work a bit early. Dinner was a pot luck and I'd wisely opted for paper plates and dining on the deck, so the work was minimal. But once the guests were gone and the dishes done, I realized I was, in fact, sick. Head felt huge and bloggy. Called in sick for work on Wednesday and haven't been back since.

It was nose and head and froat for a couple of days and then on Friday The Cough commenced. We had tickets for a concert and decided to give it a try; I made it partway through the first piece and the coughing fit forced me into the lobby where I stayed for the rest of the first half. When Joe joined me, we decided to head home. The Cough continues, being horrible and night and horrible-minus at other times. It's been a few years since I had this, and I'm thankful for that.

I've slept a lot (when the cough will permit it) during the day, consumed drugs, tea and water, and complained without ceasing.

I did pick up five quilts from the machines, machined the binding on all of them, trimmed the excess on all of them, and have the hand-stitching on the first one 3/4 finished. I've been reading -- finished a very thought-provoking book and started another. I've watched TV. And waited for it to end.

But it hasn't yet.

Marge said…
I am truly sorry you are under the weather. Stay cozy and drink lots, your choice. Hoping it doesn't last too much longer. My thoughts are with you.
Your friend, Marge
Tuesday, May 19, 2015 12:01:00 PM

Barbara Anne said…
What a bother to be so afflicted but rest assured you're not alone in the misery. Our DIL in GA has had it for nearly two weeks and Friday night DH started with it and he's still coughing, aching, congested, and had fever, too. I hope I don't get it but with a compromised immune system, it could happen. So far, so good, knock wood.

Applause for getting those bindings sewn onto the quilt in spite of feeling rotten.

Barbara Anne said…
Oops - that should have been the plural of quilt in paragraph 2 about the bindings. QuiltS.

floribunda said…
I thought Being Mortal was a very interesting book. Gawande is a terrific writer.

Linda said…
Have the same thing. The coughing wears me out because I just can't sleep through the night. I am week three with this misery
Tuesday, May 19, 2015 3:02:00 PM

Ray said…
Hope you are feeling much better soon. Being sick sucks - no two ways about it. I also found Being Moral very thought provoking and interesting. I love Gawande's work.
Tuesday, May 19, 2015 3:23:00 PM

Sandy H said…
Sorry you're under the weather--here's to swift healing! I'm also reading Being Mortal and agree--very thought-provoking. I suspect I'll be reading more of his books in the future.
Wednesday, May 20, 2015 8:13:00 AM

Unknown said…
I wish I had known you were reading the thought provoking book. My neighborhood book group just finished this book discussion. I want to retire to the place with the birds!
Friday, May 22, 2015 1:16:00 PM