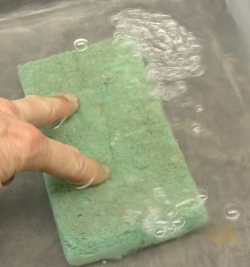 I don't post much here about my work as a hospital chaplain. I have a real fear of committing any kind of a HIPPA violation. Sometimes I write about the work in a journal. Most of the time, when I leave the hospital, everything stays there.

I usually work from 3 p.m. one day until 3 p.m. the next day. There is an on-call room (not like the one where my son tells me the interns go to have sex on Gray's Anatomy) with a bunch of mismatched furniture, a great big window, and an uncomfortable bed. We are expected to get as many as eight hours of sleep, though there is certainly no hope that many of those will be consecutive, and I keep an old quilt that I made tucked away there so I have something familiar to cover me when I do attempt to sleep.

Our basic duties include:


Some patient visits are very brief, up to ten minutes. Others are longer. Some trauma situations can take an hour or two, even more. The same amount of time is usual for a failed cardiac arrest. Sometimes I don't get everything done.

A recent shift was among the hardest I've experienced. Looking back on it, I know it was God keeping me going because I do not believe I could have managed it alone. Interspersed with the routine events and tasks, there was one cardiac arrest that responded and two that did not; two families were devastated at the suddenness of their loss. There were two separate incidences of teenagers attacked and beaten up by peers -- and I must point out that both were from affluent parts of our area, not that this makes any difference at all. There was a baby born too soon to a woman who was really too young; she was all alone, coming from an orphanage and birthing a perfectly formed miniature person, far too young to survive. We don't baptize stillborns; we do offer a blessing and I sat silently with the young woman for a time, just holding her hand. There was an attempted suicide by a person just out of her teens -- the mom just kept shaking her head, uncomprehending -- and a horrible successful suicide by a desperate man who had had just one too many bad things happen to him. If my shift had been a television show, I would have turned it off, knowing it was a gross exaggeration.

At the end of my shift, I felt like a saturated sponge after soaking up all of this pain.

My drive home is only five minutes. My bed and my shower were waiting and after a little nap and a big cleansing, I went over to my sister's for some pleasant company and a delicious meal. Blackberry and I had a quiet walk and then I slept. For nine hours. My friend Karla tells me often that she regularly prays for me in my work. There's not a shift that I'm not aware.

Barbara Anne said…
Bless you and all who are called - and who answered the call - to tend to the needs of patients and their families and the medical staff. You're so right about the variety of needs, the intensity of grief and heartbreak, and the seeming no rhyme or reason for who survives and who dies. The presence, comfort, tissues, and spoken or unspoken acceptance that you and other chaplains give are essential to patient recovery and to the wholeness of their families.

I worked ER as a staff nurse for 5 years and never felt more needed but during the 20 years I worked in surgery, I could hold the hand of each patient as they went to sleep and keep in touch by phone with their families during long procedures. Ministry is also where it finds you.

Blessed are those willing to serve where they are.

OTquilter said…
I just reread your last five posts to fully appreciate the arc of your life journey. The way we are raised and the things that happen to us obviously play a large part in determining what kind of adults/citizens/partners/parents/workers we become. The longer I live, the more I see people who are able to accept/forgive/move beyond/and use those experiences to develop the empathy and the desire to help others who have troubles. Thank you for being one of those people and for sharing your story so thoughtfully. Don't ever stop blogging!
Monday, June 08, 2015 6:29:00 PM

cityquilter grace said…
God calls those who are able to bear the burdens...praying for strength and continued ability to serve those in your path...
Monday, June 08, 2015 6:55:00 PM

Ms. Jan said…
I can think of no better person to comfort those in need, and the hospital is very lucky to have you. Take care, my friend.

Dave said…
Hi, Nancy, I'm recently reinstated to my denominational clergy roster and looking for chaplain positions myself. My first thought was I hope you have YOUR chaplain available someplace after a day like that. HIPAA be damned, people need to vent and debrief after a shift like that. I send you my good thoughts and wishes for your personal well-being and ask God's blessings on all you do.
Monday, June 15, 2015 9:01:00 AM