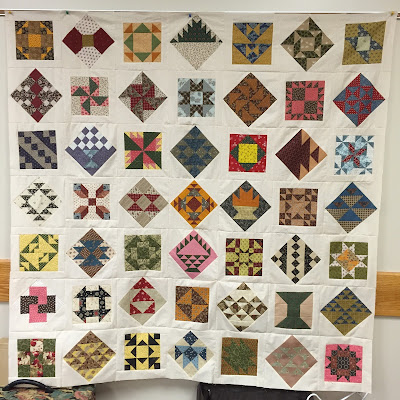 I spent the weekend in Quarryville at the Black Rock Retreat Center with seven other women. Each of us worked on her own project(s), and most of us accomplished quite a bit.

Not long before we went away I discovered a bunch of CW F'sW blocks that I had made during my Civil War phase. I'd even begun to set them, but then the war ended and the blocks got packed away. I finished setting them and arranged them in rows and columns earlier in the week, and even got a couple of rows assembled.

So the first thing I did after setting up was to finish this quilt. It will measure about 60x60 (there will be no borders but just a nice brown binding) and will go to a friend who is going through a tough time and needs a reminder to take naps! 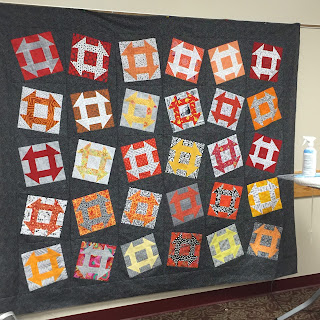 After getting that top completed, I pieced a couple of backs and made four bindings. These are tasks I'm not crazy about and never get around to doing at home. Being in a group of chattery colleagues means I need some projects that don't require intense concentration, and backs and bindings certainly meet that requirement.

Last autumn when I was Queen Bee I requested red, orange and yellow CDs on black-on-white fabric and just the opposite. Most of the participants followed directions. On a sewing Saturday a few weeks ago, I managed to get the sides on these blocks and was so exasperated at the completion of that step that I could go no farther. I laid the blocks all out in our work room at the retreat, and it didn't take any time at all for me to turn them into a quilt. This happy project doesn't have a designated recipient as yet. 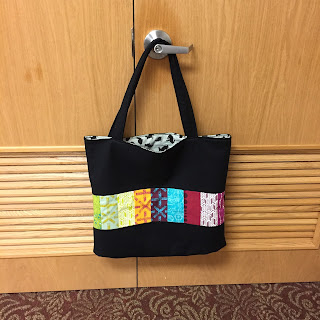 Someone did me a big favor by purchasing something for me that I couldn't get locally. She wouldn't let me reimburse her, so I decided she should be compensated with a nice, large, shopping bag.

Actually, I made two bags almost identical. The other is a dark gray fabric with a limey lining. I have one more pay-it-forward to complete for 2015 and this is going to be it.

Sometime in the next couple of weeks these bags will be in the mail on the way to their recipients. 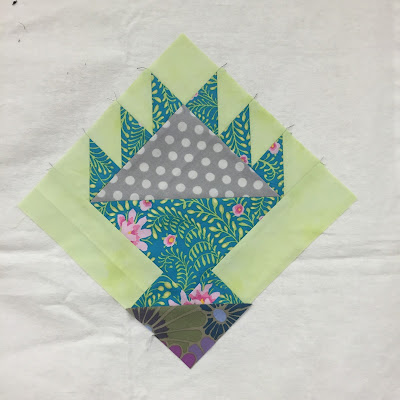 Having accomplished everything on my list by the start of day on Sunday, I decided to play! My friend Julie had sent me a collection of gorgeous cool-colored hand-dyes, and I knew they would make superb backgrounds for these baskets that had been whirling around in my head. I was right.

You all know that I never met a basket block that I didn't like, and these are no exception. This is going to be a very, very fun project.

It was wonderful to be away with girlfriends. In the workroom next door to us were a group of scrapbookers; one of them came over to tell us they had booked a massage therapist and were any of us interested in a session? Half of us responded in the affirmative and the masseuse gave us her card for future getaways. Honna and I stopped at a diner on the way home for a light lunch. Joe and Blackberry were both happy to see me return.

Unknown said…
Now THAT was a productive week-end!!!

Janet O. said…
I like the way you have set your blocks on the CW quilt, alternating straight set and on point.
Really good looking churn dash quilt!
What a great idea to have massages at a quilt retreat, and work out all of those tight spots from hunching over a machine.

Barbara Anne said…
What a wonderful weekend and I applaud your stellar idea of piecing much needed backings and bindings so you could enjoy the chatter!

Well done on getting your CW blocks set together in such a cute arrangement. How will your friend ever get to sleep with all of those charming blocks and fabrics to look at? :)

Applause on the fun setting for those CD blocks, too, and your two large tote bags and basket blocks are wonderful. You certainly hit the ground at full speed when you returned from Ohio!

marge jansonius said…
Wonderful, what a great way to spend some time with friends. My retreat doesn't come until March and am so looking forward to it.

Nann said…
Now that I've been to Black Rock I know just whereof you write! Hooray for getting two sets of blocks assembled. And, oh, that tote bag design is very appealing . . .
Tuesday, October 27, 2015 1:12:00 PM