Epic Trip Part Two: Return to Star Flyer and a Stop in Cagliari 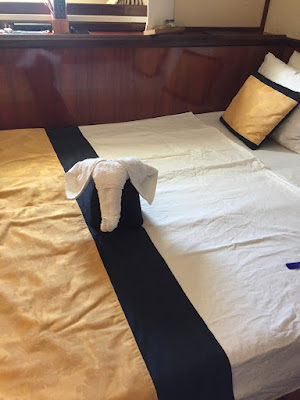 We boarded Star Flyer in Malta early in the afternoon of October 22, and spent the 23rd at sea.

This elephant was on our bed that first morning, and for several days after that, various animals showed up. I had fun photographing them and texting them to my granddaughter.

We had been on Star Flyer several times before, and it was fun to see many familiar faces among the crew members.

The day at sea was a great opportunity to meet some of our fellow passengers and to our surprise, there were two couples we'd sailed with previously! One pair was from Germany and Joe knew one of them from getting up early to see the sunrise. The other couple was one we'd seen but not become acquainted with before; the husband was immediately recognizable by his long ponytail. 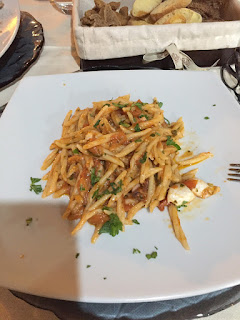 Late on the 24th we docked at Cagliari, Italy. Although dinner (and many, many additional meals) are elegantly served on board, sometimes we like to go ashore for a meal and enjoy local fare. Since this was to be our only stop in Italy, we decided to try our luck in town.

We'd been to Cagliari briefly once before, and knew we weren't missing much in the way of sightseeing, and our decision to leave the main drag and go back into the alleyways was a good one.

We found a fine little restaurant that had an excellent pre fixe menu: Four courses and a glass of lovely red wine for not very much money at all. The weather wasn't as warm as it had been in Malta, but it was still nice enough to eat outside in the alley which is our usual preference.

Barbara Anne said…
How marvelous and I love Joe's wee easel to allow him to paint at will. Even a Featherweight sewing machine would take up so much more room - and add weight.