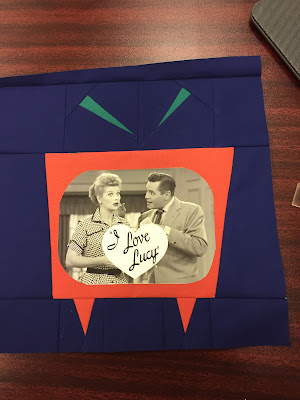 I don't know why they would call it a quilt retreat. We didn't retreat. Far from it. We advanced.

This weekend was the semi-annual quilting getaway for the Renegades. Only six of the usual eight were in attendance; the other two were dealing with serious illness, either their own or a family member's. We missed them. A lot. But their absence didn't keep us from having a really good time.

I left home with my suitcase packed, my sewing machine oiled and sporting a new needle, my bag of assorted rulers and tools and no fabric at all! I had a project in mind and didn't want to be distracted from it. Let me tell you a little more. I'd seen a pattern called Mod TV by Colorwerx on the internet and posted a link to Kathy's FB page, saying it made me think of her. She agreed. Then Helen and Judy discovered the post and said they, too, would like to make this project. One thing led to another and before long Judy and I had purchased and downloaded the patterns and shortly after our arrival at our retreat advance site in Lancaster County, we made a beeline for the fabric store and bought the sixteen fabrics we needed for the project. We loved the original design but were equally excited by our own idea for replacing the tv screens of solid colors with some of our favorite programs.

The pattern wanted us to cut out everything at once. Hah! Each tv has something like 23 pieces. Could you imagine the confusion? We started with one at a time, ultimately much more time consuming but saner. And nobody was working against a deadline. I worked my way up to cutting and assembling three at a time. I finished eleven of the 16 main blocks and haven't even really thought much about the additional blocks. The first block was challenging because it was pretty much guided free piecing, something I've not had a lot of experience with. I fretted. I said a few bad words. But I figured it out.

I'd like to say that the pattern, while initially daunting, is well written. One cuts pieces in the order they will be used. So if one is careful to stack the pieces neatly as one cuts them, and then just turns that stack over at the get-go, the whole experience is much less stressful. And the pattern is forgiving: it comes right out and tells you that if your come up short on a particular side, why, just hack off another hunk of fabric and sew it on! It called for 1/4 yard of each color; Judy suggested we each get 1/2 yard of each color. She was right.

I'm not going to be able to get back to this right away. There's something else on my wall that wants attention first. But stay tuned, it won't be very long.

Here's one more, just to hold your interest: 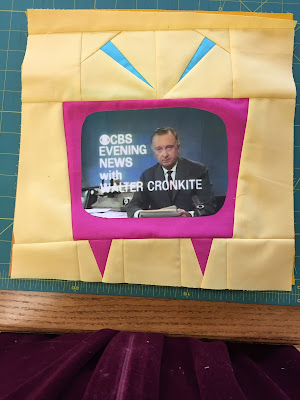 And that's the way it is.

Millie said…
"guided free piecing" huh? Interesting term. I guess that makes what I do "unguided free piecing" which I also refer to as "quilting without a net." Hey, whatever it's called, it doesn't matter. If it works for you, go for it! Love those little TV's! And I'm with Tanya. Where did you get those pictures?
Monday, March 26, 2018 7:46:00 AM

Barbara Anne said…
Love it! I'm with Tanya and Millie: where did you get those photos from TV - and my childhood, too.

With all the mess our country is in, I've often wondered what Walter Cronkite would have to say about it.

Robin said…
I really enjoyed your blog. The pattern is great. I would love to make it if I could get the screen like you have. Please tell me the secret of the screens.
Monday, April 09, 2018 12:48:00 PM