Not The Yellow Brick Road 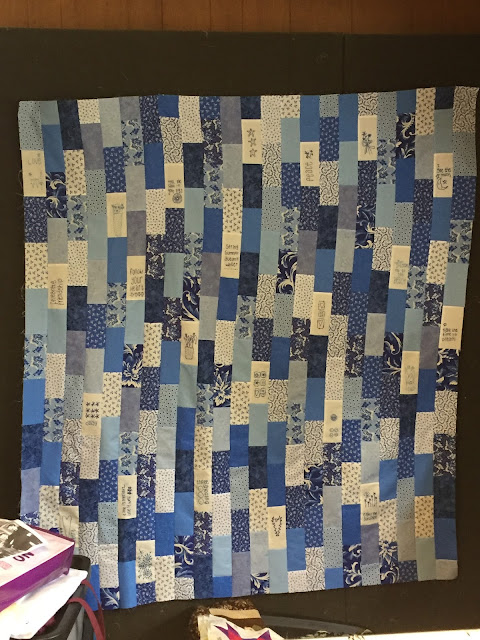 This project has been monopolizing my wall for a couple of weeks, and I finally have it all together! Joe took one look at it and named it Not The Yellow Brick Road. Sherry says it reminds her of subway station tiles.

I did the 24 embroideries back in October and November when we were in Spain. I had a FQ pack of blue prints that I wanted to use for the tiles, but there wasn't anywhere near enough. A trip to the LQS remedied that, and I cut and cut and cut and arranged and rearranged. After assembling about eight of the columns, it dawned on me that I needed a leader-ender project (see previous post) and I now have 9 Sister's Choice blocks complete.

Quiltdivajulie said…
Really, really lovely -- I like the embroideries mixed into the rectangles.
Monday, April 02, 2018 9:55:00 PM

Barbara Anne said…
What a stellar idea to take those rectangles with you on your trip so you could do the embroidery while relaxing in the evenings. Those memories are also stitched into this delightful quilt!

Quayquilter said…
Love the dance between sweet embroideries and the rectangular setting.
Saturday, April 07, 2018 2:51:00 AM