Mango Sunrise is a Flimsy 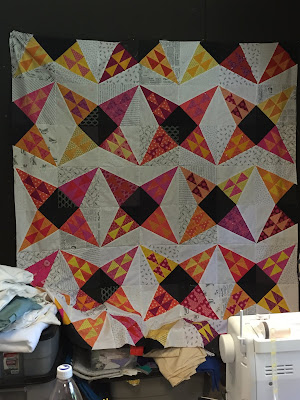 It'd been hanging on my wall for weeks. Maybe even months. Sewing the blocks into rows had been tedious. So tedious that when it was time to put the rows together, I balked.

I just balked. It was far easier to just let it hang there. I had another project I wanted to start and told myself that I couldn't start it until all those dratted rows were together. So you'd think I'd get cracking, wouldn't you? Hah! I downloaded a serious time-suck computer game and had at it. After reaching Level 238 for the second time, I was sufficiently ashamed to get to those rows.

I had the sense to put a great big safety pin in the upper right corner, just to make sure I'd maintain my orientation. In my sewing I discovered that I was dealing with some Seriously Minuscule Seam Allowances. About which the less said the better. Matching things up, especially where the exterior black joins occurred, was excruciating. It took forever. For ever. I reached the point where I had convinced myself that some diabolical soul was adding rows when I wasn't looking.

But at last it is a flimsy. It doesn't need or even want borders. What it wants is to be quilted and bound and given away. Which is all about to happen soon. I believe I have some terrific black to use for the back. And the machinist is just a phone call away. The recipient? I'm not positive, but I think it is most likely going to college in September.
Email Post
Labels: Quilts

Synthia said…
I think all your effort "paid off" because the flimsy looks terrific. You always seem to piece gorgeous quilts and I am envious. :-)
Thursday, June 28, 2018 8:31:00 AM

Barbara Anne said…
Well done in persevering through thick and thin (seam allowances!) and all of those points to match! Mango Sunrise is a stunning and beautiful quilt. Hummmmm ... do I remember your dearest suggested this block layout?! ;)

Hope we'll see another photo after it is quilted.

Anonymous said…
I'm glad to hear that I'm not alone about putting off sewing rows together. I"m glad that you got it together, it looks great. Thanks for sharing.
Thursday, June 28, 2018 2:08:00 PM

Tanya said…
Those computer games (in my case Duolingo for Spanish) really eat into sewing time. I am not getting as much sewing in anymore and I’m pretty sure my creativity began to decline when I got my iPhone. Not good!
Monday, July 09, 2018 9:02:00 AM