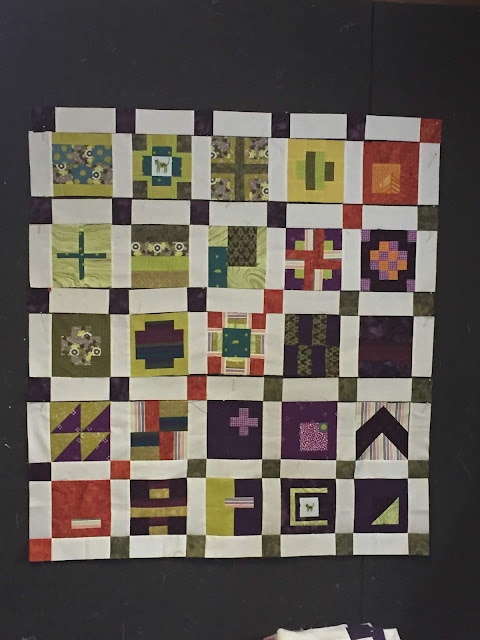 During the recent clean-and-reorganize session down in the sewing studio, I uncovered sixteen blocks from that Tula Pink book that I had begun and apparently abandoned. They were mostly greens with five that had rust in them and a couple that had purple. I was astonished. I stuck them up on the wall and for the life of me couldn't come up with a plan. The colors were kind of harsh. They didn't seem to relate to each other, even though they sort of did. I was about to just stick them in the box I'm getting ready for a scrap swap next month when my husband came along and took a look. He wasn't anywhere near as disenchanted as I was.

"Make a couple more purple ones," he suggested, "and we'll see what that does." So I did and then we started playing with possible arrangements. The orange diagonal was his idea. The cream lattice was mine. He thought that orange cornerstones down the middle would help to accentuate the orange stripe. He was right. He thought that green cornerstones on the green side and purple cornerstones on that side would be good. I made the cornerstones and then, on a whim, reversed the plan, putting the green on the purple side and vice versa. Some of the rows are sewn together. By the end of tomorrow, they all will be.

And -- voila! -- we've got a baby quilt that has some interesting stuff going on.
Email Post
Labels: Baby Quilts

Anonymous said…
Another set of eyes is so useful! My husband, who has had no art training whatsoever, often makes the perfect suggestion for a quilt. Yay for you for finishing a project!
Sunday, February 17, 2019 2:41:00 PM

Barbara Anne said…
What a great layout and most excellent suggestion from your sweetie!