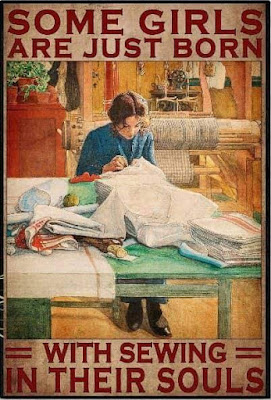 My friend had posted this picture on Facebook the other day and it resonated with me, even though I didn't "take to" sewing until my thirties. I made a lot of my own clothes and the Stretch-And-Sew movement was a heavy influence as I made shirts, pants, little jackets, pajamas, dresses for my young children as well as three bazillion t-shirts for me and nearly everyone I knew. I made some Hallowe'en costumes and a Sir Walter Raleigh outfit complete with neck ruff for Andrew's school performance.

And in 1987 it all changed when I made a log cabin quilt using the Eleanor Burns method under the tutelage of my relative, Susan.

A couple of weeks ago when I was worried that we'd be cited for some sort of housekeeping violation, I went through the studio. I gave away a Rubbermaid tub of fabrics to Ruth. I discovered a long-lost counted cross stitch piece that, alas, my eyes can't deal with. And I found some Works In Slow Process that really need finishing. Around that time, my [non-quilting, non-sewing] friend discovered a set of blocks she'd pieced back when she thought she might be a quilter and asked if anything could be made of them.

So I made a list of what was needed to set and border these extremely wonky blocks and while I was at it I inventoried other finishing needs. A yard of this, two yards of that, and so forth have been acquired. The wonkies are set and bordered and a back is pieced; this is going to the machinist this week. The modern paper-pieced triangles are being set (with black alternate blocks and side triangles, this is a daytime-only effort) and the Modified Sister's Choice are waiting their turn.

Mrs. Goodneedle said…
I love that illustration and poster; it truly resonates with me too! I did grow up, however, with a needle in my hand. I recall sewing doll clothes, by hand, and embroidering on handkerchiefs as a child. I, too, was involved in all of the mentioned classes, and "movements" along the way as well! Now, like quilters everywhere, I've been re-bitten by that cross stitch bug; oh, my! It's ALL GOOD for sure!
Monday, April 12, 2021 9:46:00 AM

Nann said…
"Housekeeping violation." Someone on a FB group (I didn't mark it so I don't recall which one) posted her a photo of her sewing room. It looked as though a high-speed fan had been turned on in that small space. I cannot envision that happening at the Stevens' house....What is it about being presented with someone else's blocks that spurs creativity all the way to the flimsy stage?
Monday, April 12, 2021 9:51:00 AM

Juliann said…
I do believe I was born with sewing in my bones. I made my first dress when I was just 6! And I am so excited to be back to quilting these days. Those found blocks sound like a fun project.
Monday, April 12, 2021 10:01:00 AM

Quiltdivajulie said…
I grew up at my mother's old Singer - Barbie clothes, doll clothes, and then my own clothes by middle school (despite the efforts of the Home Ec teacher to correct my mother's teaching methods). Then it was on to curtains and pillows and such, then baby and toddler clothes before I finally discovered quilt making once the boys were in college. I LOVE the graphic you shared! And "housekeeping violation" absolutely cracked me up. Hooray for making progress in whatever form it takes.
Monday, April 12, 2021 11:04:00 AM

Barbara Anne said…
Love the picture!
My mother and I were both born with sewing in our souls. When clearing her attic, I found two very small dolls and the home made flapper dresses my mother had made for them when she was a child! My mother made doll clothes but I made their blankets. In 4-H (suburban Chicago if you can believe that) I made skirts and a blouse before 7th and 8the grand Home Ec. I made a formal velvet dress (lots of pinning) when I was 19, then curtains and clothes in my 20s-30s, along with embroidery, crewel, a failed attempts at crochet and knitting, then counted cross stitch, and in 1992, quilting! What fun.
Enjoy all of the various projects you've unearthed and hope you'll post photos of these WOPs when they're finished to your satisfaction.

Janet O. said…
I want that poster on my sewing room wall!
I join the ranks here, have learned to embroider at a young age, and then quilting and sewing clothes in junior high--making all my own clothes in high school. Sewed clothing for my children until it was no longer cost effective, and did counted cross-stitch for several years. Then I poured my energies into more quilting. It must be a creative need that finds satisfaction in textiles.
Monday, April 12, 2021 3:27:00 PM

Bridget said…
I have to say while you may be born with sewing in your soul it doesn't mean it is an inherited trait! My mother and grandmothers could not sew to save their lives. I was taught to sew by my second grade teacher. My teacher taught me how to sew and quilt. What a special gift she gave me! I send up a prayer for her every time I pick up my needle.
Wednesday, April 14, 2021 4:45:00 PM