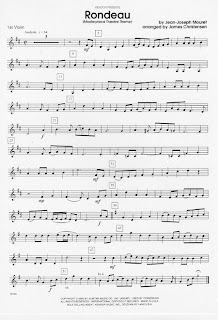 The new organist at our church is way cool. Since her arrival, the ranks of the choir have swelled, the kids are singing as a group again, and she has a way of making the organ do things that none of us suspected it could do, of turning the -- the -- volume, for want of a better, more linguistically correct term, up all the way at just the right time so that the music actually somehow penetrates our very souls.
. . . .
Yesterday was one of those days. It was during the last hymn, and we were still full of that when she began the postlude.
. . . .
This is going to be one of those blog posts where disparate elements come together.
. . . .
Bonnie and I share a subscription to Netflix and we'd decided that one of our winter projects would be to revisit -- and in some cases visit for the first time -- all of the episodes of Masterpiece Theatre's "Upstairs, Downstairs." Neither of us thought we'd ever seen the series in its entirety. The DVDs come to Bonnie first and then to us.
. . . .
On Friday afternoon we were delighted to find the first DVD in the series stuck in our door. And that evening we built a fire -- the first of the season -- and watched three of the four episodes, back-to-back. Late on Saturday night, after our dinner guests had gone, we watched the fourth. We were immersed in Eaton Place. By Sunday morning we still had Rose and Hudson and the Bellamys and the music in our heads.
. . . .
Imagine, just imagine, our delight then when the postlude began with the familiar "Ba da BUMP bump bump bump bada bada bump. . . " of the Masterpiece Theatre theme music! Right there in our own church! Joe, of course, turned to me and said in his deepest Alistair Cooke tones, "Brought to you by the Mobil Corporation," which set me to giggling. I said I was going to tell the organist and he raised an eyebrow the way he does, implying that she wouldn't get it. "She will," I told him. And she did.
. . . .
P. S.: Just in case after reading this, you need to hear it again, it's called "Rondeau" by Mouret, and it's terrific all the way through, not just the opening ten or twelve bars that we hum.
Email Post

Mrs. Goodneedle said…
We have a pipe organ at our church, and an incredibly gifted organist who makes it come ALIVE! Mouret's Rondeau was the chosen recessional following our daughter's wedding... you talk about music penetrating the soul; oh yeah! The only thing that tops this is Widor's Toccata played at full volume with all the stops removed.
Monday, January 29, 2007 6:43:00 PM