Who's Been Sleeping on MY Quilt? 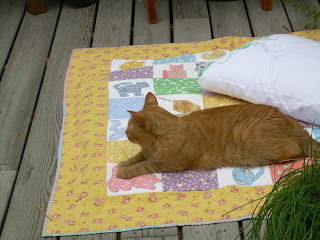 When Sherry was expecting Sam, at the baby shower that was held for her, I was in for a surprise.

My relative, Susan, is a member of the on-line quilters group I've belonged to for nearly ten years now. It's called, appropriately, Fat Quarters.

Little did I know that Suz had organized a project wherein my buddies made cat blocks out of 30s repros. Then Holly put it all together and Suz hand quilted it.

Bodacious believes he knows who this quilt is for. After all, it has all these cats all over it. 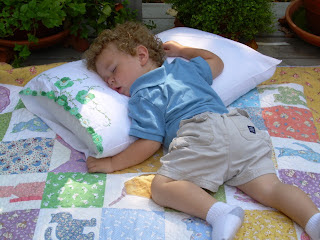 But it would seem that Bo is mistaken! Sherry, Chris, and Sam came to lunch on Sunday. You-know-who had fallen into a sound sleep between church and our house. We had set up lunch out on the deck (don't get me started about the unseasonable weather Near Philadelphia), so we just made this very comfy place for Sam to finish his nap, among the cats.


He woke cheerful just as we finished our lunch and after some lunch of his own, he was ready to roll. Pinecones are a new favorite item, from great big down to miniscule. And he came over to look with interest at the I Spy squares I'm turning into snowball blocks, mimicking each word as I told it to him. "Skateboards," "ladybug," "seashells," all rolled off his tongue easily. But the best word was, again, "Grunmum."
Email Post
Labels: Baby Quilts Grandchildren

Three Birds Inspired said…
I just discovered your blog site while wandering around in quilting sites. I LOVE IT! A Lutheran liberal...thanks be to God! We don't have those in Berks County so I am an Episcopalian looking for a roost. Regards - Suzan
Tuesday, October 09, 2007 1:37:00 PM