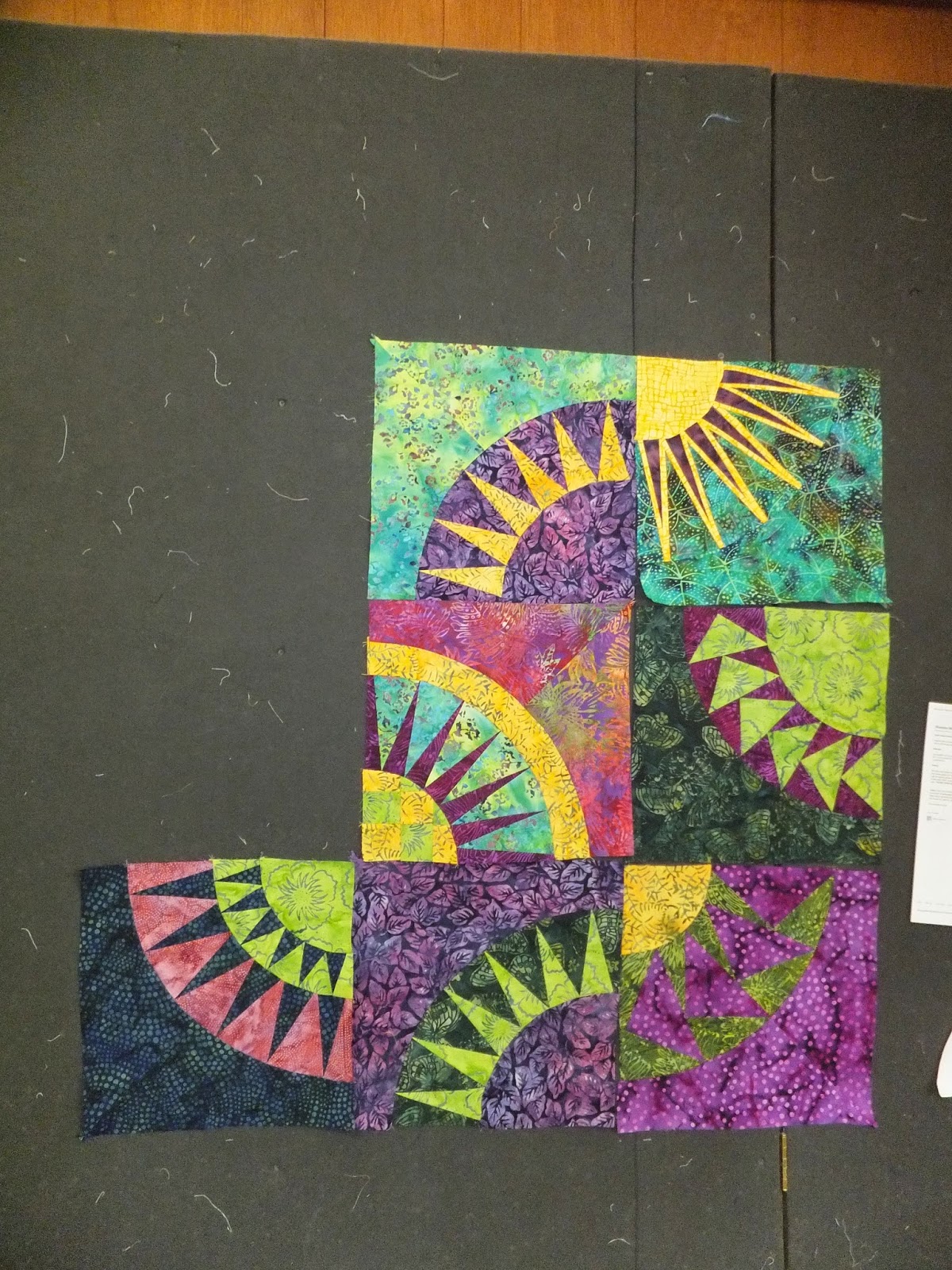 I believe I mentioned earlier that for the first time in a good many years, I am taking a quilt class. It is a four-part series on New York Beauty, a design I have long admired. My teacher is superb. My classmates, for the most part, are talented, precise people who learn quickly. There are a one or two others who are like me. It has been fun to see the different fabrics that they choose.

There have been three classes and after each one I have completed the block taught that night and made one (or two) more using what I learned in that most recent class. There is one technique that has me flummoxed. I have not photographed those miserable attempts. Tonight is the last class and I hope I can persuade the teacher to go over that one thing just one more time. Tonight we will be learning about borders and settings.

I'm not overly ambitious. If I can make a total of twelve blocks, I'll have enough for a nap-size quilt (though whether one could actually sleep under such points, such vibrancy, such gloriosity would remain to be seen). I am glad that I have taken the class. I do not find the blocks to be easy, but that is okay. I like things that take time, that require thinking and attention to detail. I think I will enjoy making five more blocks and setting them. 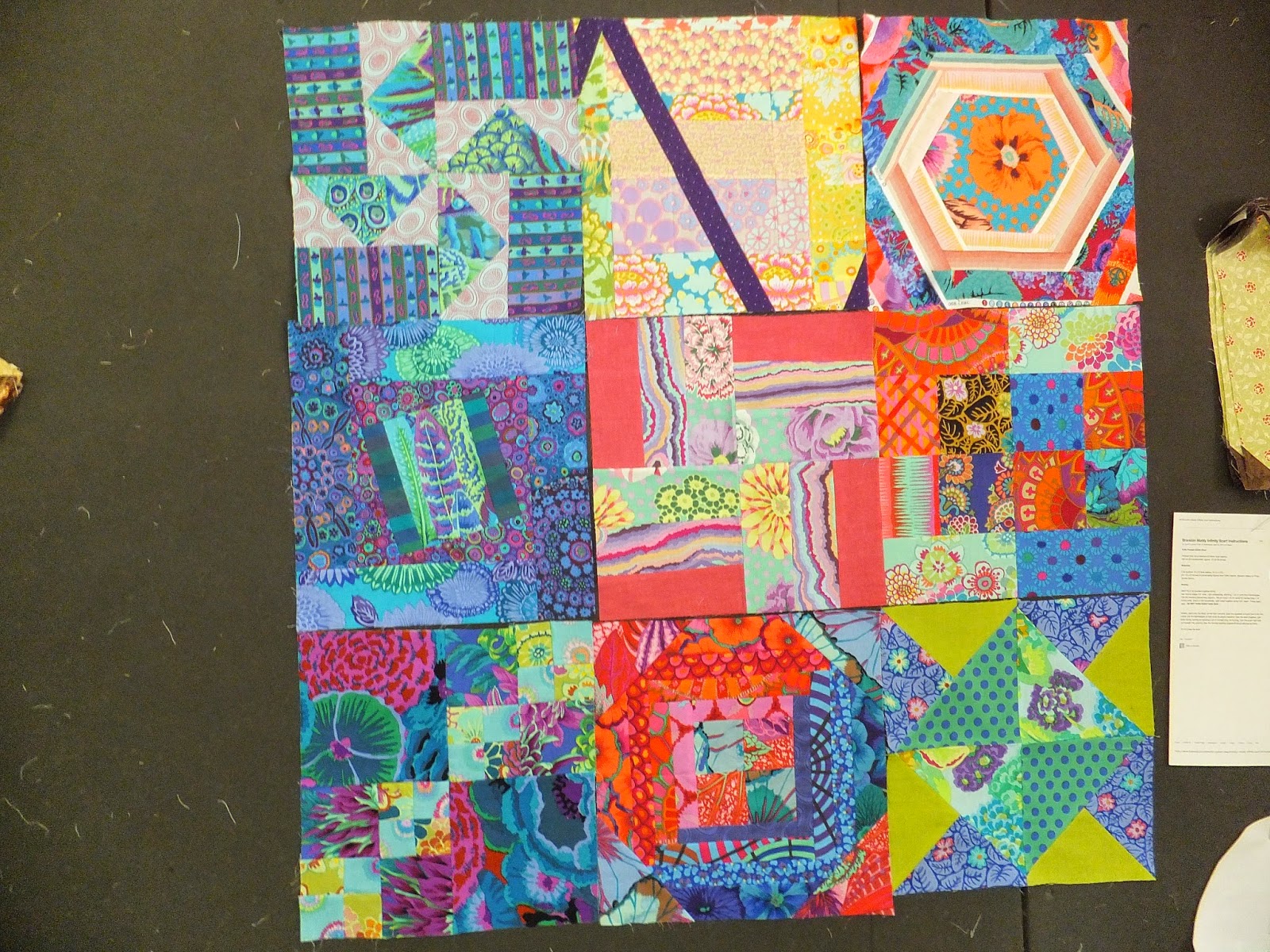 It has also been a good many years since I last participated in a block swap that I didn't organize. Recently I saw one for 12" finished blocks using only Kaffe Collective fabrics. I thought I would give it a try.

There was a place to sign up and to specify what colors we wanted in our blocks. I made a little spreadsheet and consulted each participant's color preferences, made 20 nice Louisiana blocks and mailed them out. While the final due date isn't for a couple of months yet, nearly half of the incoming blocks have been received.

The blocks are all pretty. A handful of people paid attention to my request for "blues, greens, and purples" in my blocks. Two of the blocks are real disappointments: one has selvedges visible, not just in the seam allowance, but in the interior part of the block. One has some fabric that I do not believe is from the Collective.  Fortunately, I have odds and ends of nice cool-color fabric on hand and will be able to make replacement blocks for those that turn out to be unusable for my project.

Barbara Anne said…
Applause, applause on your stellar NY Beauty blocks,one and all!!!! They are fantastically lovely and so jazzy because of the perfect fabrics you chose. Well done! If you don't master that troublesome block it won't be missed.

Sorry some of your exchange blocks don't match your color request. I know some quilters are intentionally sewing with selvages but methinks that should stay a personal choice. On the other hand, these participants did sent their blocks! Do you suppose the wrong blocks were sent to you and some other folks received the blue/green/purple blocks meant for you? Just a thought.

Janet O. said…
I love New York Beauty blocks. I've yet to make any. These are lovely!
Swaps are always a risk, aren't they? At least you can fill in the blanks where the blocks have not measured up to your expectations.
Monday, May 12, 2014 10:37:00 PM

Karla said…
Your NY Beauty looks fantastic. I know if I was attempting this it would look a whole lot different! :-)

What are selvages? I am assuming it is the frayed edge.

Gari in AL said…
You are doing a great job with your NYBs. I made some when I first started quilting (didn't know they were supposed to be hard) but only made a few for the back of a vest. I keep thinking I will make a quilt but now I know how much work they really are. And, I stopped doing swaps for that reason. I loved making the blocks but it was so much work to deal with small, poorly made, bad fabric blocks. I never got selvages. ;-)
Tuesday, May 13, 2014 10:40:00 AM