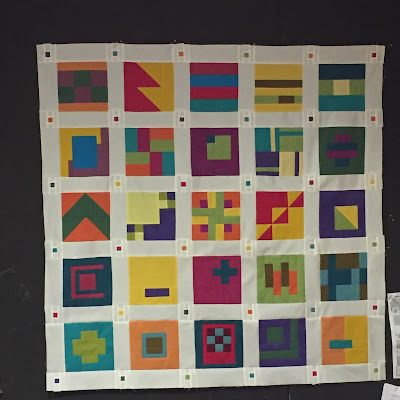 A week or so ago I gave in to the urge to make Tula Pink blocks out of bright solids. It's been an enjoyable process.

Initially I had planned to make sixteen blocks (they finish at 6") and put wide white borders on them, then apply a 9" template to cut wonky blocks. Turned out to be a bad idea -- they really wanted a 12" template and that just was going to use up more fabric than I wanted to spend on this project.

Himself is partial to tiny cornerstones under almost any circumstances, and I thought they might work very well with these blocks. So I made nine more and went with that plan. We're both pleased with the outcome. He says they look like signal flags. He's right.

Janet O. said…
I think this is my favorite quilt made from these block patterns. The teeny cornerstones, solid fabrics, white sashing--it all combines to make a very pleasing design. Oh, the name is perfect, too!
Monday, December 12, 2016 9:58:00 AM

Barbara Anne said…
What a jazzy delight this quilt is, especially those wee colorful cornerstones!

Alas, I gave my Tula Pink book to my sweet DIL who is interesting in quilting but not so interested in traditional blocks.