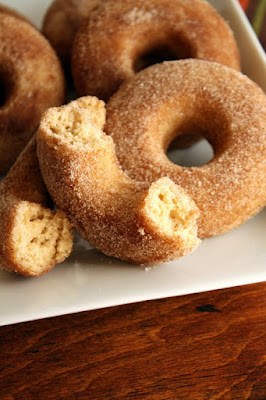 So the first year, Maggie and I happened to run into each other right in front of the Entenmann's display at our local grocery store. I was holding a box of apple cider doughnuts, something I'd never seen before. Maggie hadn't either. So we agreed to buy a box and split them, four for her and Frank, four for me and Joe. Later on, we agreed that while they were nice, they really weren't anything particularly special.

An August or so later, she showed up with a different brand of the same thing: Apple Cider Doughnuts. Except these were Donuts rather than Doughnuts. They looked a lot like the Entenmann's from the previous year, a lot like this picture.

Again, they made a cuppa coffee a little more special, but in and of themselves, not so much. We decided that in the future, we'd save our calories for something else.

But that third year rolled around, and one of us found yet another source, and for some reason believed they would be more authentic, whatever that might mean.

This year's version came from a local farm stand. That would have to make a difference, I thought, and snuck a box in with the sweet corn and peaches that Himself was carrying. 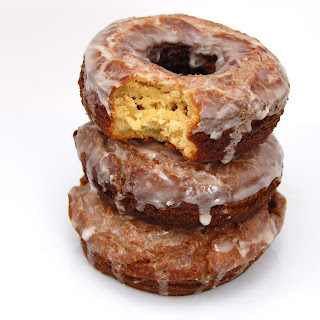 So, here's the thing: All of the ACDs that we've tried over the years look like the photo at the start of this post. And all tasted pretty much the same. Good, but not phenomenal. We give up.

This morning I decided to write about the Quest for the Definitive Apple Cider Doughnut (or Donut if you insist) and how this year is really the last year. And I Googled for images of the same, and found the ones on the square white plate (a lot like my square white plate, as it happens).

I also found this image, which is of a completely different specimen. Doesn't it look fabulous? It's gotta be different, mouth-watering, truly delicious, doesn't it?

Anonymous said…
Now you made me homesick! Peaches from Lancaster and York. Always the best. When you have all that rich soil it comes through in the food. And the Old Country Store and Zooks. A round the corner Ken's Garden Center. You just took me on a trip "down home". Been in Ct over forty years but Lancaster-Lebanon I still "home". And what a special relationship to have with your niece. Makes me miss mine. I just filled my backpack for this year's back to school for foster children. We usually never know the recipient. How special to know that your kindness made an impact and that is being passed on. I think you were renewed by being away from the news and reminded that there is still a wonderful world and we need to focus on the good. So glad you had a peaceful day.

Quiltdivajulie said…
I feel your disappointment in the stops along your quest. If I encounter an ACD here, I shall let you know about it promptly!
Saturday, August 18, 2018 10:08:00 AM

Robby said…
I think what you really need is an apple fritter with the chunks of apple in it, and the glaze made using reduced apple cider. That sounds like apple-y goodness to me. But I understand the phenomena of "sounds to good, but tastes so-so". Good luck!
Saturday, August 18, 2018 5:41:00 PM

Janet O. said…
The only place I have ever seen (and tasted) apple cider doughnuts was at some apple farm store in Vermont. They were fresh from the oven, and reasonable tasty, but I think the ones in your second photo look so much better (however, their apple cider was the best I have ever had). I hope you find them someday soon!
Saturday, August 18, 2018 6:59:00 PM

Amy said…
The ones that I enjoy are at the Apple House in Linden, VA, right of off I-81. If you are headed to the Virginia Quilt Museum in Harrisonburg, VA, it's a great stop. Course, what makes them great is that they are hot out of the oven (or however they cook them). Wonderful with a cuppa and some quilty friends.
Saturday, August 18, 2018 7:53:00 PM

Barbara Anne said…
Krispy Kreme has apple fritters that are wonderful. I think I've never ever had an Apple Cider donut. Sounds delicious...