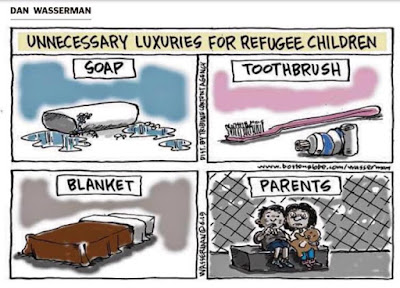 Like many other people I know (and a whole lot that I don't know), the situation involving the [lack of] care of migrant children forcibly separated from their parents has been very much on my mind.

I have been outspoken in my dislike of our current President because of many things. And now this.

One of the few supporters of Mr. Trump that I know pointed out to me that the practice of separating children from their parents and keeping them in cages began during President Obama's administration. I was incredulous. Research has revealed this to be true. Had I known about it then, I would have been as outspoken as I am now: This was wrong. This still is wrong.

Since day one of his term in office, Mr. Trump has systematically moved to undo everything that President Obama accomplished. I wonder why there is this disconnect now? He has the power to undo this, too, but instead has expanded it.

An attorney recently argued in court that provision of soap and toothpaste/toothbrushes along with sleeping provisions other than concrete floors with aluminum blankets were "not required" as part of "safe and sanitary conditions." "Not required" is different from "forbidden," but here we have a situation where the letter of the law trumps the moral imperative.

I read that those outraged and compassionate individuals who showed up at the camp bearing basic hygiene supplies for these children were turned away because no donations were to be accepted.

I don't know anyone who would like their own children or their grandchildren [mis]treated this way. And I don't want to know anyone who -- if asked to care for another person's child temporarily -- would go about it like this.

Mr. Trump's wife has chosen as her project, "Be Best,"*  "a three-part effort to help our children manage the many issues they are facing today, including encouraging positive social, emotional, and physical habits..." * The first of the three pillars of Mrs. Trump's program is "well-being,"* defined as  "promoting values such as healthy living, encouragement, kindness, and respect..."*

Bravo, Mrs. Trump. I cannot think of a better initiative.

I wonder if her husband and members of his administration know about it.

*All quotes from whitehouse.gov

Shasta Matova said…
So many times this administration, I have had to fact check things that seem so unbelievable. Really, they want to take away the ethics department as their first act? Really, they are in court publicly saying toothbrushes aren't necessary for sanitary living? It is mind boggling living in this alternate reality.
Wednesday, June 26, 2019 6:04:00 PM

Anonymous said…
You're so right about trump wanting to undo all that Obama did. But this doesn't seem to faze him and he blames the Democrats. I was going to say something about the party in power, but won't. I just wonder how anyone can actually believe that the treatment of these children is okay.
Wednesday, June 26, 2019 10:52:00 PM

Quiltdivajulie said…
Excellent post. EVERYONE deserves the right to brush their teeth!
Thursday, June 27, 2019 9:49:00 AM

Barbara Anne said…
Outrageous and inexcusable. Vote them out of office, one and all. Better yet, impeach the "top guy" and charge the rest, then throw the lot in jail without the things they say the poor kids don't need.
Thursday, June 27, 2019 12:03:00 PM

Carol- Beads and Birds said…
I am compelled to share this: according to FactCheck.org, "previous administrations did not have a blanket policy to prosecute parents and separate them from their children." It was after the Trump administration announced its "zero-tolerance" immigration policy in April 2018, in which everyone who illegally entered the U.S. was referred for criminal prosecution, that thousands of migrant children were separated from their parents.

Sadly, so many that support trump find nothing wrong with the treatment of immigrants or their children. This all reminds me of the stories we know are true of how Russian children placed in orphanages grow into unfeeling and uncontrollable adults.

Something is broken in our government and trump continues to drive the wedge deeper
xx, Carol
Saturday, June 29, 2019 9:13:00 AM