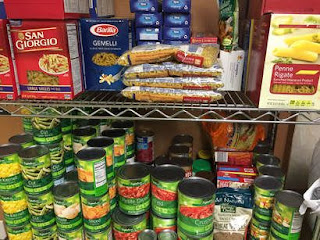 When I arrived at the food pantry this morning, it didn't feel cold. But I guess it was. Or maybe it was just that I was working outside for three hours. Whatever. I've been home for 2-1/2 hours now and am still not warmed up.

Our pantry has been busy lately, both with donations and with consumers. Today was more of a typical day, after the frenzied pre-Thanksgiving donations. Still, guests began arriving well before the time we were scheduled to begin serving them.

I've been reflecting on some of the people we regularly serve. You know, it's one thing to think about a kind of faceless, nameless generic food pantry client, and another to see some folks every two weeks and kind of know their stories.

. . . We have this one guy, Sam, who arrives on foot. He's gentle and soft-spoken and profoundly grateful for what we give him. He lives in a rented room in a house with other individuals, and has a terrible landlord who refuses to replace the refrigerator that has died. Our cupboard manager was able to get Sam a small microwave (apparently the stove in the place went long ago) and today she left her post for fifteen minutes to take Sam home and haul in the tiny, under-the-counter fridge that she'd been able to procure for him.

. . . Louisa usually comes regularly, every other week, and when we ask her if there is anything special she needs, she always says, "a can of cranberry sauce and a jar of olives." I'd love to see her recipe box. She's 95 and spends her time knitting and tells me that before Christmas she's going to bring a supply of hats for all of us who volunteer.

. . . Margie is a client, but lately she's been coming over to the donation side. When she gets home with her pre-packed bags, anything she doesn't need or use, she sets aside. Then every once in a while she comes to "give back."

. . . Thelma and Louise both have bad backs, and when they come to receive their bags, they methodically go through and remove canned goods because those make the bags too heavy for them to carry.

. . . Wilfred drives us crazy. He arrives on foot and says that someone will come to pick him up in a few minutes. He hangs around just outside the open door, peering inside, and asking for whatever he sees in addition to his pre-packed bags. He chatters constantly and interrupts the volunteers as we try to serve our other guests and deal with donors. After about an hour and a half his ride will arrive and we cringe to think that he'll be back, right on schedule, week after next.

. . . Jeff is ridiculously good looking and drives a spiffy car. He comes on behalf of his grandma, who happens to be a vegan. We don't get a lot of those kinds of donations and we're all so fond of Jeff that one of our inside people is setting up a special shelf with the label "For Jeff's Vegan Grandma."

. . . And finally, we have Jean, Jane, and Joan. They come together and say that each of them has five in her family. There's a table we set out that has odds and ends (lately canned boiled peanuts --hello? and canned brined cucumbers -- what?) and items with imminent expiration dates. Guests are allowed to help themselves and add things they need to the prepacked bags they receive. There's sometimes a great big box of individually wrapped candies and snack items there, too. These gals always want lots of extra things and are insistent on getting them, and when they finally pull away, the table is much less full and the snack box pretty close to empty. I can't help it, I'm suspicious of them. There's something that doesn't quite ring true about this trio. I tell myself that people who are hungry and struggling to feed their families prolly can't handle the concept of leaving something for the other guests but, God help me, my self isn't buying it.

Janet O. said…
I don't know these very people, but I know these people, Nancy. I spent some time volunteering at our local food pantry once my children were all in school. This all sounds so familiar!
Thursday, December 02, 2021 9:12:00 PM

Barbara Anne said…
Bless your heart, the hearts of the other volunteers, those making donations, and those needing the donations. God's children, one and all.

Vicki W said…
I live in a rural area and we have a local, church run, pantry that I support a lot. They also sometime provide financial support for electric bills and whatever. When they give them payment help they make it a requirement that they get food from the pantry if they think they will need future help. Sooooo many of them never follow through and call back for more financial help that they do not get. I support this pantry because, like yours, they know their clientele.
Friday, December 03, 2021 7:46:00 PM

Nann said…
I'm too quick to judge by appearances (thinking of the last three clients in your post). I need to get over that. (Though how should one react to people who are obviously gaming the ssytem?)
Monday, December 06, 2021 10:26:00 AM

Samplings from Spring Creek said…
I have a dorm size refrigerator I am looking to donate any suggestions
Wednesday, December 08, 2021 2:53:00 PM