It occurs to me that I've not posted anything quilty in a while. This doesn't mean I haven't been sewing, however! Been binding some UFOs and that sort of thing, mostly. This picture is of the project currently on the design wall. I had some autumn leaves blocks from a swap and I had some 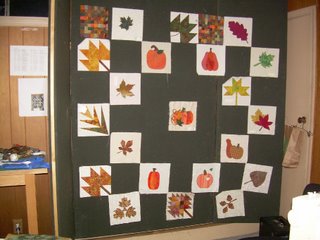 punkin blocks from a swap. Both sets have been hanging around for ages, wanting to be made into something.
. . . .

The thing is, though, that I think about doing something with these blocks only in the autumn, and there isn't much hope of getting the projects finished while it is still autumn. Such a problem!
. . . .
Fortunately, the leaves and the punkins are the same size blocks with similar backgrounds. I thought they might look nice together in one quilt. Fooled around with them, setting aside the jack o'lantern blocks from the punkin swap. Didn't want just plain blocks as the alternates, and I thought back to the Cool Hearts quilt with the mosaic background and decided to go for that, using autumn tones scraps. It will take a while to make those mosaic blocks, but I think I'm on the right track. And I suspect I can have it finished by next autumn!
Email Post