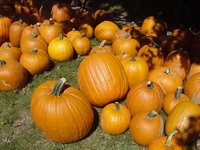 Fall has arrived here Near Philadelphia. A few weeks ago when Joe went backpacking "upstate," he brought back some beautiful colored leaves. We didn't have them here then. We do now.
. . . .
I'm a person who needs and loves the change of seasons. For a while we lived in Florida where there were two: Warm and Hot. Then we lived in Chicago where there were also two: August and Winter. Here Near Philadelphia we have the four distinct ones, and Spring and Autumn are my favorites. There's someting potential about Spring and there's also something potential about Autumn -- a foretaste of the more intense seasons to come.
. . . .
As eager as I am to see the crocus pop up through the snow, promising spring, I'm just as tickled to drive past a field of pumpkins, and the more of them the better. Spring is touted as a time of new beginnings, but I think I'm not unusual in thinking of fall as a time of new beginnings -- the start of the school year, the meeting of the new teacher, the new friendships (or not!) with new classmates, new subjects to learn.
. . . .
And it's not just the newness of fall. It's also the apple cider and gingersnaps, the pulling up of the blanket at night, the lighting of the first fire, the picking out of Halloween costumes, the cat's coming up in my lap to get warm. It's anticipating the major holidays that are synonymous with family and friends. It is changing from the kind of light and fluffy books I read in the summer to the kinds of books that require more of an effort (and are, of course, more satisfying). It is making lasagne, oatmeal, and roasted vegetables after a summer of lighter, sexier fare.
. . . .
I'd been thinking about Autumn's having arrived here and was planning to blog a little about it, and then today I visited Desertsky's blog and found out that she Belongs In Winter. I giggled a little bit about that, thinking back to the "Color Me Beautiful" project which pronounced me a "Summer," and told me what colors to wear and what ones not to wear, advice I follow to this day some twenty years later, believe it or not. I followed the link and took the test, and behold!

Anonymous said…
I am a "fall", too :-)) The seasons are changing here, too, at Rusty Acres.