I Couldn't Have Said It Any Better 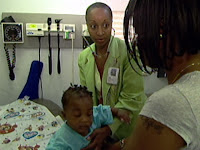 Greg's blog appears in my sidebar. I don't read him daily, but thassokay because he doesn't post daily. Many of his posts relate to the struggles he experiences as a gay man living in a society that's not always tolerant, frequently suspicious, and often downright nasty to "his kind." If you've ever scrolled all the way down my sidebar, you may have seen my rainbow flag and deduced that equal rights for my LGBT sisters and brothers is an important issue for me.

On November 2, however, Greg's post wasn't about the possible disconnect between being gay and being a Baptist. This time he's taken on something that is even more important, and has produced a succinct, sincere, and well-written piece about something that's been troubling me, something that I just hadn't had the opportunity to document. Now I don't have to: my friend's done it for me. You can read it here.
Email Post

Anonymous said…
As a school nurse with many needy students, I could not agree more with Greg's post. Thanks for the link.

Juliann in WA said…
It is amazing how so few words can communicate so loudly. Thanks for bringing attention to this issue.
Thursday, November 08, 2007 10:32:00 PM