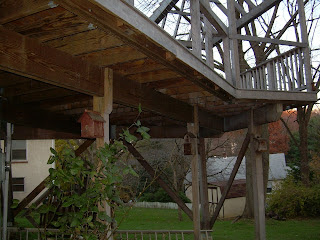 From the time we moved into our house, nearly eight years now, we've been aware that the principal residents of the property are not ourselves, but rather the birds. That first summer, there was a window airconditioner in the kitchen window, and some enterprising sparrows had built a nest on the sill under the unit. Somehow we never got around to removing it at season's end, and the following summer some sparrows (the same ones?) moved right back in and raised at least three broods there. We have a screened porch off one side of the kitchen and before we built the deck, we ate most of our warm weather meals out there. The sparrows spend their nights in the eaves just outside that porch.

Once we got the deck up, we erected several feeders that we can see from where we eat in the kitchen.

We also have birdhouses. After the deck was built, I asked Joe to mount a birdhouse on the deck support so I could see bird activity from my sewing/computer window on the lower level. He did, and it was quickly occupied (location, location, location!). Last winter I noticed that birds were taking refuge in the birdhouse during the winter. 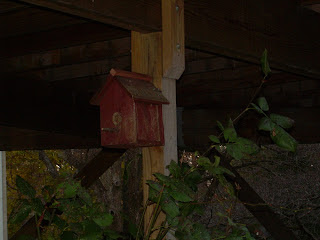 A very few weeks ago, Joe placed several more birdhouses on the deck supports, and this weekend there was a fluttering flurry of activity! Not only are the birds roosting on the roofs, perching on the perches, and popping in and out of the entries, but yesterday I noticed them taking twigs and other nesting material inside! Clearly, they are claiming spots and making them comfy cosy for the winter! I quickly cleaned out the dryer lint trap and spread some of the fuzzy matter on the bush nearest the enclave.

The greatest hub of activity concerns the double-decker house, but I couldn't get a good picture of it. This photo, admittedly of dubious quality, is of the house closest to the window. When I sit at the downstairs computer, the birds are about eight feet away and every nuance of activity is visible.

Yesterday I laughed out loud as a bird who had gone into this particular house discovered at the time of egress that s/he was a bit stout. Several face-forward attempts to get out failed; an about-face appeared to occur as the tail section popped out the hole a few times; then another pause for a turn-around, and finally the birdy burst out, shaking its head in disbelief, "What was I thinking!" I could almost hear him say.
Email Post
Labels: Life Experience

Tanya said…
The bird story is so cute! I wish we could attract birds. Tetsu isn't so enthusiastic because they spread bird seed around when and if they come. Alas, they don't come much (even in winter! even with free birdseed provided!) Maybe having a cat staring at them from the window is a little daunting.
Monday, November 26, 2007 6:15:00 PM

Mrs. Goodneedle said…
Great post, Nancy! I haven't seen any birds nesting in houses here over the winter months... or, maybe I just haven't paid attention. I always wonder though, when I hear stories such as this, if they're migrating birds who missed the last flight out. ;)
Tuesday, November 27, 2007 7:24:00 AM

Angie said…
Isn't it just so much fun watching our feathered friends! I want to put up some more bluebird houses. Seems like I spend more money on bird food than I do for people food ROFL, but it's oh so worth it! Enjoy!
Tuesday, November 27, 2007 2:20:00 PM