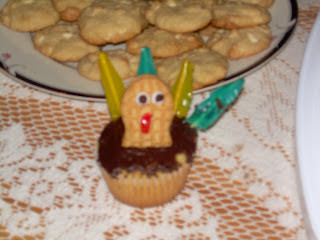 It was, of course, a splendid Thanksgiving. The kids from Virginia all came up, and brought a couple of guests along, so there were ten adults and the baby for dinner. Then we were joined by Bonnie and her family, ten or so more, for dessert. My daughters and nieces each brought a dessert to save me some work, but I had to make a pan of cherry chocolate bars nonetheless. A wonderful surprise was Kristin's offering -- she made spectacular turkey-looking cupcakes. One is pictured here in front of Amy's signature cookies: Lemon White Chocolate Chip.

We were so happy to all be together, and it was wonderful to see how grown up Bonnie's granddaughters are getting to be. Her grandson Ben had brought along his girlfriend; Bonnie had told me earlier that she had an unusual name and even told me what it was. For the life of me, I couldn't remember and I told my crew that Ben was bringing his girlfriend, Gumdrop. They were all delighted. Turns out her name is Asia, not Gumdrop, but she's as sweet as a gumdrop could be and even gave me permission to call her by that name. Abby and Juliette had a wonderful time entertaining Sam.

At various times during the weekend I actually found some time to sew. These Jacob's Ladder blocks have been on my while for a few weeks. They are made from various Diwabo taupes and a nice black batik. I had the thought of having the lightest ones in the center, and have them get progressively darker as they came out to the edges, and was feeling pretty good about my progress.


The people who got to preview it seemed pretty underwhelmed, and I've begun to feel my own enthusiasm for it fade. So today I took the blocks down and put them aside for another time.


I'd made Amy a Jacob's Ladder quilt several years ago, using "Japanese prints" and cream and it turned out beautifully. This time, I don't know . . . . Perhaps it just needs some time? Or perhaps new previewers? Whatever. I put some different blocks up to ponder for a while. And will revisit Jacob's Ladder in 20008! 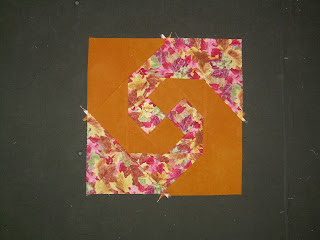 Branky is a member of my Fat Quarters on-line quilting group and she's been going through a tough time and has fallen behind on her monthly blocks. She's a fine machine quilter who just finished a project for me (more about which later), and she seems so frazzled and stressed that it occurred to me that she didn't need the additional worry about getting to her late blocks. So I told her to send them along to me and I would make them and get them out for her. I've finished two of the four. The one for Molly looks remarkably like the one that I made for her, so I won't post a picture of it. But here's a picture of the one for Becky. There are two more to go and then Branky should be caught up!

Susan said…
That was so nice of you to help Branky out. Not unexpected, but nice of you. =) I love your blocks, and I'm sorry you put them away. I know sometimes it is hard to keep enthusiasm up in the face of other's lack thereof, but trust yourself. You've not made anything ugly that *I've* ever seen!
Sunday, November 25, 2007 7:03:00 PM

CONNIE W said…
I once had a friend from India whose name was Asia but pronounced "Osh-a". She has since returned to India to live. Sounds like you had a wonderful Thanksgiving with all your loved ones.
Sunday, November 25, 2007 8:00:00 PM

atet said…
What a nice thing to do for your friend. I've said it before, I'll say it again -- quilters are the nicest folks :0). As for the Jacob's ladder blocks -- I'm in love with them! Please get back to them, I think this is one that needs to be all together to get the full impact -- but it is going to be stunning!
Sunday, November 25, 2007 9:52:00 PM

Marla said…
Sounds like a wonderful Thanksgiving for a woman who is obviously a wonderful friend. Your Jacobs Ladder blocks are gorgeous. Don't give up!
Monday, November 26, 2007 12:24:00 AM

Mrs. Goodneedle said…
Sounds like a splendid Thanksgiving. I'd get a new batch of previewers, my eyes see a gorgeous JL quilt in the making. (Just so you won't feel alone, sometimes my belovedt quilt previewers don't get quite as enthused about certain projects as I might be...)
Monday, November 26, 2007 6:25:00 AM

Tanya said…
That Jacob's ladder is beautiful. I'm afraid those that previewed it don't have "patchwork" sense. Don't let them sway you! It is very striking!
Monday, November 26, 2007 6:13:00 PM

Anonymous said…
Nancy - thank you so much for making my block! That was very kind of you to do that :-)

Personally, I love the JL blocks, but I'm kind of partial towards that pattern.