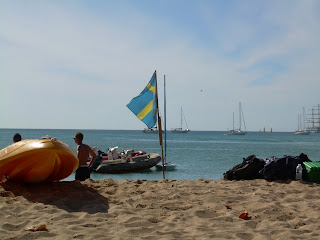 The four people on the water sports team for Royal Clipper all came from Sweden. They are young, fun-loving, easy-going people. The rumor aboard ship was that the owner's wife was a Swede and she insisted on hiring the water sports people. True -- who knows? I did see a portrait of the Queen of Sweden in the ship's library and wondered about that since the ship is registered in Luxembourg.

At the beach, the sports team would always plant their flag so people would know where to come back to catch the tender to return to the ship. I loved it. 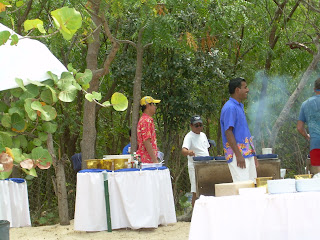 The day that we were in Antigua, the cooks moved much of their food and equipment to the beach and prepared a barbeque for us. It was a lot of fun and something different.

The first morning on Royal Clipper, there was fresh pineapple among the breakfast offerings. It returned on the luncheon buffet. It was the best pineapple I'd ever tasted. And so at night I developed the habit of asking for a piece of fresh pineapple for dessert. And it was cheerfully prepared for me as a special order. The day of the barbeque, a very special treat was in store for me: Grilled pineapple! To die for. 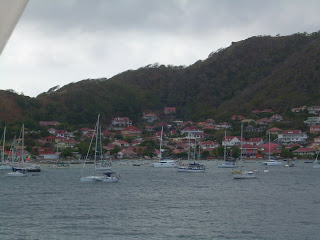 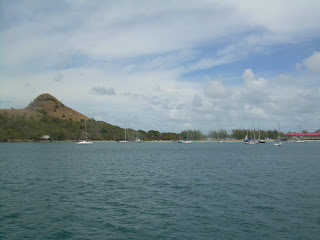 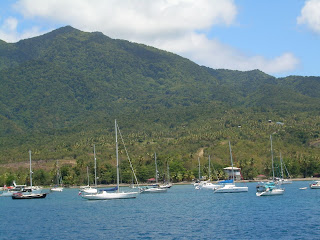 The scenes from aboard ship more or less blur together. Each island had a pretty little town at the coast and many sailboats at anchor offshore. The islands, except for Barbados, were very similar in appearance, very hilly from their volcanic origins. 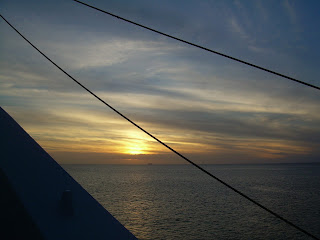 Sailing off into the sunset.

Mrs. Goodneedle said…
Did you happen to wash all that pineapple goodness down with a piña colada? Seriously, it all sounds heavenly! Me thinks you need to commemorate this trip with a PINEAPPLE quilt. ;)
Monday, April 06, 2009 1:34:00 PM

Helen said…
I have to admit and totally agree with Mrs. Goodneedle's comment. A pina colada would have been a great addition to the pineapple.

I ditto the pineapple quilt idea, too!

Gosh Mrs. G...would you just write comments for the both of us from now on?? :)

*karendianne. said…
Beautiful scenery and oh, real REAL pineapple. That makes my heart skip a beat and my mouth water. I was thinking there must have been some handsome young men around there, too! I know this isn't about me but I was daydreaming and, well, you showed the spot where I need to be!
Tuesday, April 07, 2009 6:48:00 AM

NoVA Dad said…
Your photo post here couldn't have been timed more appropriately, especially since winter has decided to descend on the D.C. metro area again. Clouds, cold wind - not what I had bargained for at this point in the year.

AnnieO said…
Looks like you had some wonderful times on your trip--my BIL and SIL took a clipper trip last year to the south pacific and they also raved about their vacation. Glad you both enjoyed it so much.
Wednesday, April 08, 2009 10:14:00 PM