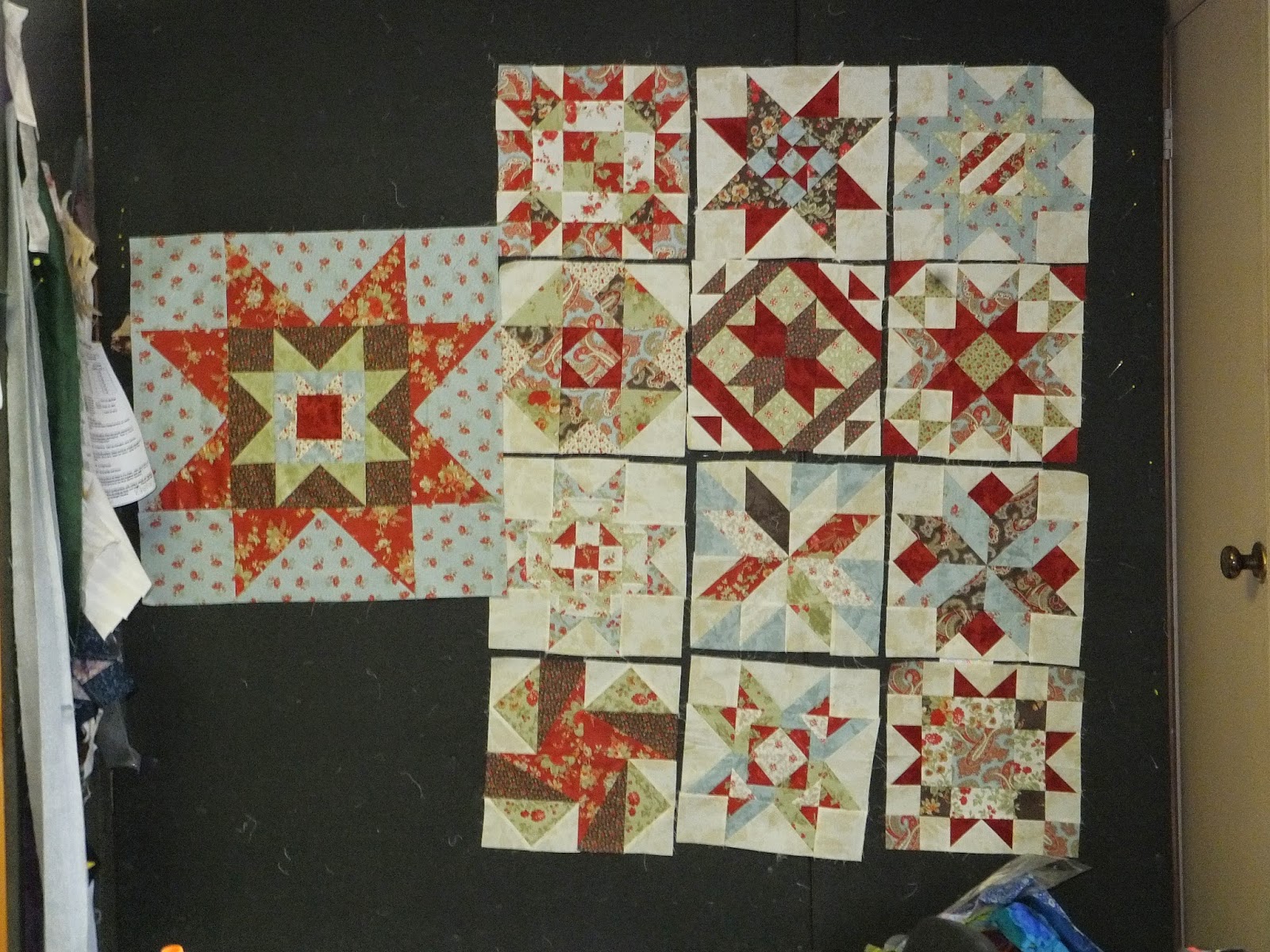 I had mentioned earlier that I had uncovered a UFO, a BOM from 2009 and had resumed work. It is hard to be motivated by a project that I don't particularly like. There are a lot of really nifty blocks, and one of the things I like about the FQ Shop BOMs is that their directions for these complicated blocks are simple and clear. What looks as though it is going to be a huge challenge is broken down into easy steps, and the blocks get made with no heartbreak or confusion.

The other thing I like so much about FQ Shop BOMs is the generosity of fabric. There is usually enough left over from a block to make another block of some sort (though I have not done this). I have let these left-overs accumulate and if I ever finish when the project is finished, we'll see what becomes of them.

That center medallion was fun to make. It is 24 inches, and will be surrounded by the 12 inch blocks along with some interesting lattice.

I know full well that just because a project is not to my taste, that doesn't mean that it isn't a pretty quilt. Surely someone will be delighted by it someday. If I had a destination in mind, I might be motivated to finish it more quickly (because last night I worked on something entirely different!), but that is not the case. And even more inhibiting, in another box, is yet another FQ Shop BOM that isn't anywhere near as far along!

Three Birds Inspired said…
I ADORE this quilt. I love the fabric line and wish I had more of it. While I have embraced more modern fabrics, 3 Sisters are still my favorite design group from Moda.
Friday, April 11, 2014 9:35:00 AM

Pati said…
Oh Nancy, I feel your pain!!! I have so many BOMs that I've collected over the years just sitting in boxes because I've grown tired of them or they are now not to my liking. I'm thinking that when I retire and don't have $$ for fabric, these are what I will work on!!!
Friday, April 11, 2014 10:25:00 AM

Linda said…
I have three BOMS from the Fat Quarter Shop---all unfinished. Going to take the pledge and not sign up for any more till completed.
Friday, April 11, 2014 10:44:00 AM

Janet O. said…
It is hard to be motivated for a project we don't love anymore. Got some of those myself.

Anonymous said…
I have that one at the same stage as well a the two Fatquartershop BOM's that followed in various stages, I had to put my foot down and not allow myself to sign up for anymore! Too stressful not having enough time for everything on my plate as it is!
Friday, April 11, 2014 6:40:00 PM

Barbara Anne said…
How nice to have your center Rising, Rising, Rising Star finished as well as many of the 12" blocks! Hope you can keep the steam up to complete the remaining blocks as I imagine this quilt will end up prettier than you think it will.

When it is a flimsy, you can decide whether to donate it, have a blog give-away, or perhaps the perfect recipient will come to your mind as the sweet Sister came to your mind to receive a recent beautiful quilt your made. Enjoy the process!