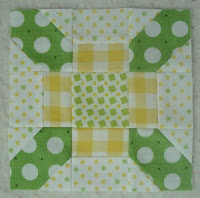 Turbo found this block on Pinterest and we kind of thought it would be a good one for our next projects.

I have three main categories of fabric that I'm using these days: Kaffe Collective, Brights (including Pat's and Marilyn's scraps), and a group I think of as "Edgy." Sometimes the Brights play well with the Kaffes; that's what I've been doing lately.

So it seemed like it was time for a change and I did some math and picked out some fabrics from the Edgy group and made the first block, forgetting that math isn't my strong suit. I should have made a test block out of scrappy fabric. 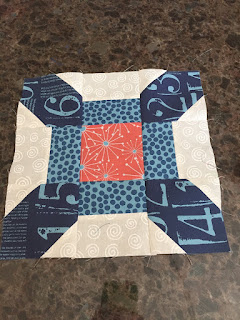 As Turbo says, I'm close. I'll cut those white squares a quarter-inch larger for the next attempt.

Meanwhile, I'm thinking it won't be impossible to take this apart and salvage at least five of the units. I might even be able to remake the offending corner blocks, but I'm not sure. As I said, math isn't my strength.

Janet O. said…
Well, it looks pretty good to me. I struggle to figure the math when things need to meet up at specific places, as in this block.
Looking forward to seeing the next, perfected, "edgy" block.
Friday, August 28, 2015 1:29:00 PM

Quayquilter said…
Sometimes it's not the maths that makes units come out too small, it's the fact that fabric and sewing doesn't always conform as flipping over the seams and thickness of thread can eat into that exactly measured and cut 1/4 inch. I too am acquiring edgy fabrics including the one with numbers you've used but struggle with how to use them. Good luck with your blocks - I always love your fabric choices. Mary
Saturday, August 29, 2015 1:41:00 AM

Barbara Anne said…
Love the fabrics and the blocks as they are in these two pictures. What's not to like? These fabrics and blocks will make a happy, edgy quilt!