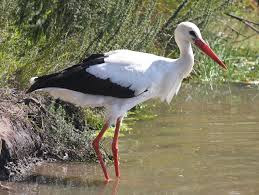 Why, yes, that is a stork over there to the left. It certainly is. But it isn't my personal stork.

In my job at the school for autistic children, with just a couple of exceptions, my colleagues are  twenty-something and thirty-something females, and there is some unwritten rule that there must be at least two pregnant teachers at all times. Right now we're expecting a boy in October and a surprise in December. So come the end of September, there should be another announcement of expectancy.

When I worked at the hospital last weekend, I stopped in at the maternity floor to visit the daughter of a friend and her daughter, the latter being approximately twenty-three hours old. My arms were straining to pick her up.

I wrote earlier about the family member whose miracle twins are due in ten days (I say four); there's another sweet family member with a little girl coming also in October. And just this week I learned of a long-awaited adoption that will happen in the near future.

I know I have my Alaska story to finish. And there are a couple of other blog posts stirring around in my head. But today I just needed to pause and reflect -- there is new life and potential new life surrounding me. I feel blessed.

This is one of my favorite quotations:
"I love these little people; and it is not a slight thing when they who are so fresh from God,
love us." - Charles Dickens

Enjoy the new little ones in your circle of family and friends and the glorious snuggling warm bundles of joy you'll soon be holding!

AnnieO said…
Oh, lovely to have babies in our lives! All my nieces and nephews are getting grown up, glad there are going to be grands in the future to enjoy.
Monday, August 10, 2015 1:33:00 AM