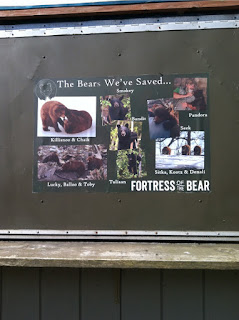 All too soon, Friday morning arrived and it was time to leave our new friends and our home aboard Admiralty Dream. We were part of the group who were taking the first flight out of Sitka and so we were taken by bus directly from the pier to the Sitka Airport. We expected to fly out in two hours and received word on our arrival that there was a delay; it would be many more hours before the plane would arrive and depart again.

Before we could really get settled in with our frustration and disappointment, our familiar Alaskan Dream bus driver popped into the small lounge area. "Back on the bus!" he offered. It seemed that Alaskan Dream Cruises was not going to just let us sit in an airport. We were taken back to the Hospitality Suite in Sitka where we stowed our bags and learned that a special excursion -- at no cost -- had been arranged for us to visit a bear preserve.

And so off we went.

We learned that when a mother bear is killed, the authorities also euthanize her cub(s) because the young would not survive the next winter without her. A group of people established The Fortress of the Bear, a haven for bears who would otherwise be killed. We watched as three brown bear siblings, two other brown bears,  and a pair of black bears played, cavorted, ate, and slept. 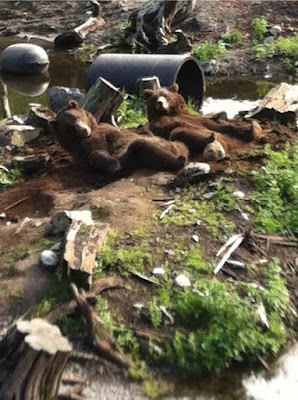 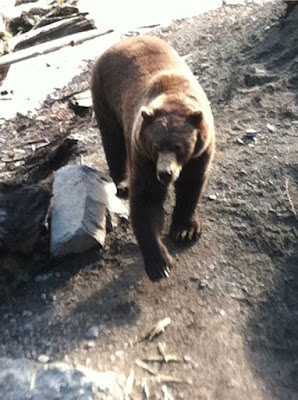 The bears are large and intelligent; some of them have learned some basic sign language and can tell the keeper that they want to eat. It would be easy to forget that they are very, very dangerous.

These bears, having been taken into captivity, must spend their entire lives at the Fortress; they are not permitted to be released into the wild -- having been in captivity, they have been exposed to human maladies.

We spent a good bit of time at the Fortress; then the bus took us back to Sitka where we did some additional sight-seeing and bought our lunch. Then it was time to return to the airport and leave Alaska.

While in Alaska, I met many people who work there for the ten weeks or so of the summer tourist season and then go do something else for the rest of the year before returning the next summer. Some are teachers, but others leave Alaska and go to Hawaii or Mexico to work the tourist season there. These include the ship personnel -- chef, stewards, etc. -- and many people who drive busloads of tourists and provide commentary, the workers at the fish hatchery, and more. I had no idea that this lifestyle existed, much less how many people have chosen this nontraditional way to live. Joe says they are adventurers.

Janet O. said…
That is an on the ball tour company. You were treated right. Interesting stuff about the Fortress! Currently sitting in the Philly airport waiting for my connecting flight to NH. Always think of you when I am here.

Barbara Anne said…
How wonderfully interesting! I've learned so much from your excellent trip narratives amd, just from today now know about the bear Fortress haven and a very amazing (to me) kind of nomad life I had no clue existed.

How marvelous you and Joe found such an stellar cruise line that took such good care of you two and the other passengers, even to the point of sparing you the boredom of hours at the Sitka airport with the excursion to see the bears and to get lunch.

Great photos, too. Thank you again!