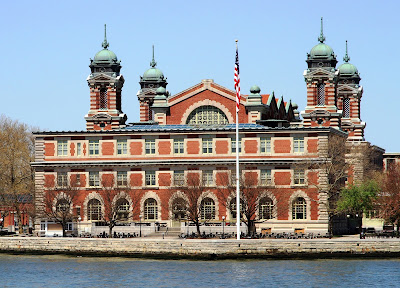 We drove up to northern New Jersey yesterday and took the ferry to Ellis Island. Neither of us had ever been before, and while I'd thought it would be a nifty outing, we just never got around to it until I learned that my great-niece is doing an internship there this semester. Funny how that became the impetus to take the trip!

We learned a lot. My impression previously was that Ellis Island was a dreadful place where immigrants were mistreated. I learned otherwise.  Yes, of course the sheer numbers of individuals meant that they were managed like cattle. But not mistreated. It was the steamship companies who brought the people via steerage who abused them, causing many to become ill before landing.

The museum/park was so interesting. We like to start with the orientation film. The National Parks do a terrific job with that. Throughout the museum were black-and-white images, information plaques, and artifacts. Joe observed that the dormitory set-up reminded him of the berthing compartment on a Navy ship. One thing that I noticed was in the food area: The menu for the day was posted (including beef stew for the main meal three consecutive days!) and pieces of the china and silver services were shown. Most people were processed within a day; some were hospitalized until they were healthy enough to be admitted, and actually only two percent of the immigrants were rejected and sent back home -- at the expense of the steamship company.

We had a surprisingly tasty lunch with Abby at the cafe on the premises; we caught up with what is going on in her life and her aspirations for the future. She recommended we visit the Tenement Museum in NYC, and I'm already looking for a date to do just that!

Barbara Anne said…
How interesting and informative! I've never been to Ellis Island either but had the same impression you did before your visit.

If you've never seen the FDR memorial in Washington, DC, that's amazing, too. It's one that all elected officials should see yearly and keep in mind so they remember to do the jobs they're elected to do and do them even better.

Janet O. said…
Just seeing the photo, I had thought it was a European building--except for the flag. Interesting stuff.
Saturday, November 07, 2015 3:58:00 PM

Vivian said…
Definitely go to the Tenement Museum if you can. I chaperoned a class trip there many years ago and it was really interesting. It is definitely the perfect companion to a trip to Ellis Island -- a continuation of the narrative about the immigrants lives so to speak.
Sunday, November 08, 2015 10:03:00 AM

Sue said…
Nancy, you might enjoy reading A Fall of Marigolds if you have not read it. The sections set on Ellis Island are very interesting. It is a good read as well.

LizA. said…
I'm so sorry that they didn't open that museum until after I had moved to the west coast. Guess I just need to put it on our someday list. Meanwhile, we are making plans to go to Germany with a group from our church in June 2017 for the Luther 500 Festival.
Tuesday, November 10, 2015 2:04:00 AM

Ms. Jan said…
We were very disappointed when we visited in May, as most of the artifacts were removed during Hurricane Sandy, and were not replaced due to lack of climate control. I was seriously hoping for more, as both of my paternal grandparents entered the US via Ellis Island.
Thursday, November 12, 2015 12:50:00 PM

Nann said…
What a nice field trip, Nancy. It looks as though the weather cooperated. We visited Ellis Island in, hmmm, 1996. I think of the courage of the immigrants who passed through those doors. Then I think of the Syrian refugees who seek a safe haven somewhere, anywhere.
Sunday, November 15, 2015 2:11:00 PM