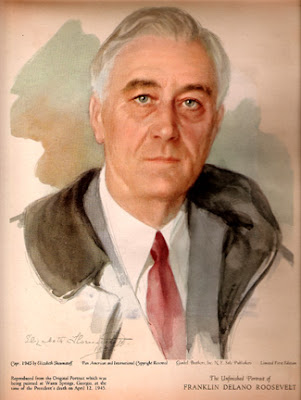 Until I was ten, I don't remember there being any photographs displayed in the house where I grew up. When my sister graduated high school, her commencement portrait was placed on top of the piano (and joined by mine eight years later). But there were no other photos on display.

There was, however, a very large print of a painting in our den. It was the unfinished portrait of Franklin Delano Roosevelt, my parents' hero, in the place where an ancestor's portrait might normally be found.

When I was thirteen, the play "Sunrise at Campbell" starring Ralph Bellamy tried out in Philadelphia before opening on Broadway. I did not come from a family that patronized the arts at all; yet, that year my father purchased tickets for the whole family, including my sister's fiance, to attend a performance. My father read Roosevelt biographies, and so did I when I got old enough. I've read every one I could get my hands on, and have seen all of the movies and PBS specials on the Roosevelts. I felt duty-bound; in some odd way, it seemed this was my own family I was learning about. I also was captivated by their story.

Joe and I have talked for a few years about taking a little trip up to Hyde Park and this past week we did just that. On Friday we toured Springwood, his boyhood home, and spent a long, long time going through the Presidential Library. We attended the film at the Visitors' Center and wandered around there. With another couple, we took a shuttle to Top Cottage, the private retreat FDR had built for himself as a place to get away from everything. Our guide there was very knowledgable and let the four of us show him what we wanted to learn about. On Saturday morning we had a private tour of Eleanor's retreat Val-Kill and the Stone Cottage.

Everywhere I looked, there were reminders of the home where I grew up. I was fascinated to note a "what not" shelf on the wall at Val-Kill that was identical to one my mother had in her home, and intrigued to see that Eleanor had the same china pattern as my sister.

Later on Saturday morning, Joe wanted to tour the Vanderbilt mansion nearby. I urged him to do that, though I chose to wait in the shady parking lot with my sewing, reflecting on all we had seen. I had come to be immersed in the Roosevelt story, and didn't want to confuse myself.

Gretchen said…
Wonderful post! I would like to tour the same places. We went to Warm Springs & the Little White House years ago when we lived in GA. My husband has a copy of the Unfinished Portrait hanging in his office. FDR is admired greatly in our house as well.
Saturday, June 04, 2016 11:32:00 PM

Dogwood Lane Rambles said…
FDR was my mother's personal hero as well and revered in our home when I was a child. I was raised by a single mother who was a young woman during the great depression and her stories made an indelible mark on me and I'm sure formed my political and social opinions.
Sunday, June 05, 2016 11:29:00 AM

Quiltdivajulie said…
Interesting - "I came to be immersed in and didn't want to become confused" -- great way to manage the number of things entering your mind!
Sunday, June 05, 2016 5:57:00 PM

What a marvelous trip you two have been on! The Roosevelts have always interested me, too, and we recently saw the PBS series. If you've not seen FDR's monument in Washington, DC, I urge you to go sometime when you're headed south. FDR's example should put many of the current politicians to shame in their greed for power and their horrid carelessness about the citizens and the environment.

Nann said…
Now that you've seen the Roosevelts at Hyde Park, do put Campobello on your travel list. (Our one visit was 20+ years ago and we would like to go back. We were very close last year when we were on Grand Manan, but our itinerary took us northeast to P.E.I.) Have you been to Oyster Bay? (Home of the Theodore Roosevelts.)
Friday, June 17, 2016 5:10:00 PM