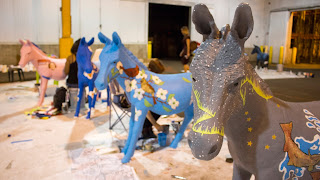 I think that the Convention is going to be a good thing for Philadelphia, much as I felt that way about the Papal visit last year. A couple of people I know who work in the downtown area grumbled about the Pope's visit and I imagine they'll grumble about the Convention. Disruption in the commuter's routine is tough; I get that. But I'm glad the Convention will be in Philly and I'm tickled red, white, and blue about the donkeys.

Once again, history will be made in Philadelphia when the Democratic Party nominates Hillary Clinton as the first major party woman candidate for President. Back when President Obama was elected the first time, my friend Ruth made a wall quilt in celebration. See where this is headed?

I haven't organized a block swap in a long time. I guess I thought those days were over for me. But I'm thinking a smallish wall quilt celebrating July of 2016 is in order for me. Anyone else? I'm thinking blocks of any size, any color, appliquéd, pieced, paper pieced, a great diversity of donkeys, much like the 57 that will grace the City. I'm thinking said blocks would need to reach me in two weeks, by July 8. If there are four or more people interested in donkey swapping, leave a comment below and be sure I have a way to contact you with further details.

Update:  Welcome Amy, Kathleen, and Liz! Details will be emailed later today. As of now, sign-ups are closed because we need to get going!

Lcrrkhs said…
Hillary and Barack are both from my home county of Cook County, IL! Count this bleeding heart pinko liberal Democrat in for this swap!!!