History Being Made In Philadelphia 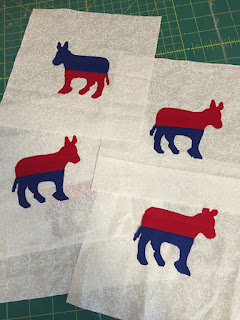 Not this coming week, but the next, history will once again be made in Philadelphia when Hillary Clinton officially becomes the Presidential nominee of a major political party.

A couple of weeks ago I posted about the decorated donkeys that are all over Center City and suggested a donkey swap in celebration. A generous half-dozen of us made seven-inch blocks featuring donkeys and they were swapped out this past week.

I'm hoping that while the Republicans are doing their thing in Cleveland I can get my banner together. In addition to the donkeys, Kathy has arranged for a friend to provide machine embroidered Hillary blocks and I'm thinking I will just have to have a Philadelphia Pavement block. Stay tuned!

Barbara Anne said…
Applause for the donkeys and hurray for the history that's about to be made!!

To my horror and chagrin, the other side's "candidate" has promised to end the separation of religion and government because, in his words, "Christians, Jews, and those of other religions cannot even talk with each other." Hogwash.