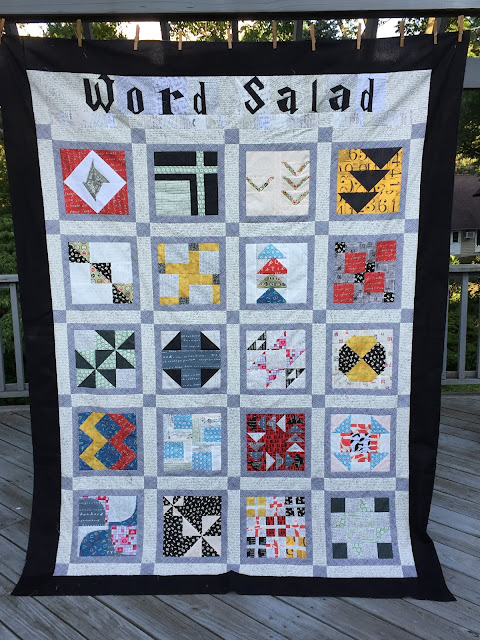 Back in December, a pair of Aussies named Linden and Crystal started up Project 48 and invited the world of quilters to play along. Their plan was that over the course of one year, quilters of all levels would learn how to make 48 different blocks at a rate of one per week. I joined and once it began in January, each Thursday I would get antsy waiting to see what block we'd be confronted with for the coming week. Some were very easy, some were wonky, some were more challenging.

I decided to use a group of text prints I'd collected and with the exception of some black solid or semi-solid, that's all that you can find in my quilt. I stopped after twenty blocks, having achieved my goal of having enough for a flimsy, using these wordy prints. Along the way, the quilt got the name "Word Salad," and once I had the twenty blocks assembled, I paper-pieced (yes, I did!) the title and added it. The borders went on today.

I've had a wonderful time with this. One block per week was easily doable, and it was loads of fun seeing what these designers would come up with.

I don't plan to start another project through Project 48, but I'll continue to stop in on Thursday evenings to see what the peeps are doing. And I still have left-over text prints, so who knows what will happen!

Quiltdivajulie said…
Congratulations for successfully washing that cat! What in interesting quilt this will be to curl up with in the evenings.
Friday, July 01, 2016 10:43:00 AM

Barbara Anne said…
Word Salad is outstanding and a pure delight! Well done on creating this one-of-a-kind quilt from your wordy fabrics and the quilt's name from your successful paper piecing. Applause!!

AnnieO said…
Looks terrific! I like text prints but seldom buy them, dunno why not! Admiring your tenacity with the paper-piecing from afar--that method makes me twitchy!
Sunday, July 03, 2016 7:27:00 PM