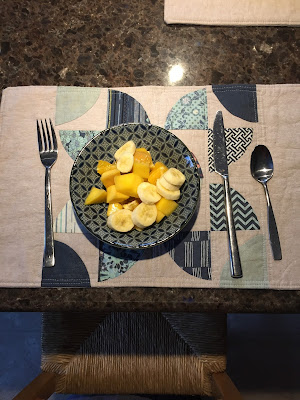 The Guild held the annual Elfster exchange last week and -- as they say -- a good time was had by all most. The meeting was under attended; apparently, there was bad weather in part of the surrounding area. And for mysterious unknown reasons, the Elfster algorithm was faulty -- at least one person's name was received by two others. It will all get straightened out somehow.

But for those who were lucky (myself among them), there were beautiful hand-mades shared. My wish list had included a book and a pair of placemats that had blue in them. The person who had my name provided both items as well as a 2x12 ruler -- a size that I didn't already have and have found to be very useful.

I sit and look at the book. There are many glorious possibilities. I look at it and I ponder. I would really like to make one of these lovelies. Whether and when remain to be seen.

But we are using the placemats. Daily. 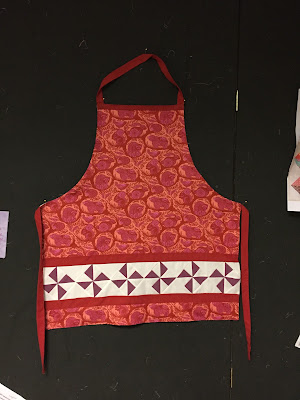 My own recipient had a couple of specialty rulers on her list. Easy peasy. But she didn't indicate any hand-made item. By fortunate coincidence, I was seated near her at the November retreat. When the conversation turned was manipulated to the topic of aprons, I learned that she is a definite fan. I had bought some Tula, thinking there was apron potential for a couple of people on my Christmas lift. Those didn't actually get done. Yet. But I did make this one for my Elfster recipient along with a pair of matching pot holders. The specialty rulers and a bag of chocolate filled out her package. She seemed as pleased with her gift as I was with mine. 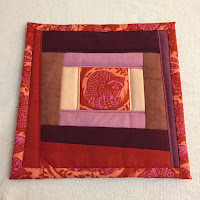 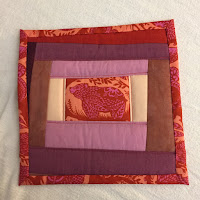 Carol- Beads and Birds said…
Beautiful apron and mats! Love the fabrics you chose. I absolutely LOVE to where an apron when cooking. I must admit that mine are not special. The simple white chef kind that you don't worry about splattering grease on. I always tell myself I'll make an apron, or personalize one for myself as I do for others...but I never do.
xx, Carol
Sunday, January 22, 2017 1:53:00 PM

Carol said…
Your placemats are lovely! Would you show us what the center looks like as it appears there's a snippet of fabric peeking out from under the dinner plate. I am thinking my Accuquilt template of that shape might be perfect for this. And good job on the apron and pot holders. Lucky recipient!
Sunday, January 22, 2017 3:32:00 PM

Janet O. said…
Really like the way you put the pinwheels in the apron!
That book looks challenging! I'll be interested to see what you make from it. Of course, there is no rule that we have to actually make any of the quilts in the books we own. : )
Sunday, January 22, 2017 11:07:00 PM

Amy said…
I bought that Anka's Treasure apron pattern right after you posted pictures of your first ones. My sister-in-law was the lucky recipient of one made from Mary Engelbreit kitchen fabrics that year. After seeing your lovely Elfster apron, maybe it's time to dust off that pattern and make one for my kitchen...
Monday, January 23, 2017 3:54:00 PM