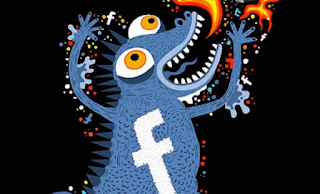 Initially, I was disinterested in social media. It all sounded like a big time-suck, and I didn't want any parts of it. Then the tech guy at the school where I was working at the time said that the adults needed to get involved with social media, to find out what it was all about, to learn why it was so captivating for the students. He urged us to get Facebook accounts.

It was great fun. Soon I was in several-times-per-week contact with friends far away. They posted pictures of their families (ye, gods, that guy I watched grow up next door is a grandfather already!), their travels, their quilts. It was wonderful. In short order, I'd reconnected with a couple of high school friends, lost these many years; reconnected not just on line but over some lovely lunches together. I enjoyed learning what they had made of their lives. People shared their pleasurable as well as poignant moments. I felt connected. Sure, there was the gal who seemed unable to make any kind of a move without posting ("took a shower"), and I let go of her pretty quickly. But, by and large, I enjoyed it.

Over the eight or nine months leading up to the 2016 election, however, my Facebook content took a turn for what ultimately turned out to be the worse. It was so gradual that at first I didn't even notice that I was reading way more moral outrage than I was reading glorious grandchildren. I watched as "friendships" dissipated -- people unfriended those of a different political persuasion. Then it happened to me: I found I just didn't want to read any more of Lulu's adoration of a certain comb-over. I quietly let her go. But the dis-ease that I was experiencing didn't go away and I discovered that it wasn't the Trumpists who were impacting me so much as my own peeps -- the other bleeding-heart idealistic liberals!

I came to realize that I was getting most of my news (and editorial content) from Facebook, from the political sites I'd begun to follow, but even more by the constant denouncing of the deplorables. It was getting to me bigly. In an effort to seek some balance, I stopped reading Huffpo and subscribed to The New York Times. That helped some. But in the weeks following the election, the political posting has become all the more fervent, as if somehow, some way, ranting (word used in the kindest possible sense) could make things different.

My wise husband said, "Facebook is like meeting someone you know on the street. You have a few seconds of chat/catch-up. You ask about the family; you speak about your vacation. You don't hold forth about what's happening (or not happening) in DC. You pet their dog and you move along."

I'm in process of re-evaluating my FB involvement. I've disconnected the few political sites I had espoused. I've unfollowed (but not unfriended, just in case) the most outspoken, single-focused preachers. I'm thinking hard about whether to stop Facebooking entirely. It would be healthier for me to pretty much stick with the Times for my news, and not have these political sidewalk conversations that make up such a big part of FB. But how else would I know about Bobbi's daily gratitude (which I seldom comment but always ponder), about dear Anne in England and what's going on in her world, about the perambulations of my seminary classmates, and the wonderful photos of everyone's children and grandchildren? And the quilts, above all, the quilts.

No cow pictures here. I don't want this to be a Cranky Old Woman post. I'm just sharing my current thinking and waiting to see how it evolves.

Kat said…
Agree on every point! I too, have made several adjustments, even tho I could just continue to scroll, I am taking the time to hide, and frequently choose the option to not hear from the source again. I have unfriended as well, when it was just to much. Sometimes you do have to just move on. I'm in a better place for making the changes. I also have thought about getting off Facebook entirely, but since most have gone this route, how would I know what my friends are up to? It's evolving, and by making choices with in the fame, I believe it is better!
Wednesday, January 04, 2017 10:52:00 AM

Janet O. said…
I will be interested to see what you decide. Am not on Facebook, and I admit there is definitely a down side to that. I am not up on all that is going on--sometimes even within my extended family. But then, that this is also the plus side. Confusing, no?
Wednesday, January 04, 2017 11:27:00 AM

Quiltdivajulie said…
I have been staying away from FB since October when, as you say, the climate changed drastically. I'm in the process of unfriending all but family members (gotta see those baby photos from near and far that are shared). Excellent post and ironic timing -- but then, great minds and all that.
Wednesday, January 04, 2017 2:20:00 PM

Paula, the quilter said…
I haven't unfriended or blocked anyone, but I am, like Kathy McCarty, taking the time to hide the source of the post: both left and right. I have also 'liked' a lot more cooking pages and quilting pages in FB therefore flooding my news feed with the comfort of food and quilts. All the vitriol from both sides has almost disappeared from my feed.
Wednesday, January 04, 2017 2:25:00 PM

Karla said…
I love FB for the connections with old and new friends. But I found out quite a few are the political beast that you mention. Actual, venom filled hate. I could never understand that. So, I have been using FB less and less. I only use it to quickly scroll for the pictures of people, places and things my friends love(and the occasional joke!). But, I am no angel, I sometimes, not very often I get sucked in, when I can't hold my tongue, um, I mean fingers.
Nancy, I will be sad to see you go. You are one of my friends that I look for in my feed. :-)
Wednesday, January 04, 2017 8:01:00 PM

AnnieO said…
I've not unfriended anyone, but had to unfollow a couple of relatives who were far too fond of sharing outrageous diatribes. The hair trigger response of either saintly praise or deadly vitriol is very tiring. It's hard to find real news on FB! Hope things settle to some middle ground before too long.
Wednesday, January 04, 2017 9:08:00 PM

rappy said…
I actually left Facebook years ago, sometime circa 2011, for non-political reasons. I've recently come back, but strictly so I can participate in certain groups. I've come back under an alias, and have accepted only those friend requests needed to join certain groups (mostly quilty). I hardly ever even look at my feed.
Thursday, January 05, 2017 6:20:00 AM

Barbara said…
So agree with what you've said here. Facebook is social media I love to hate. I'm constantly plotting how to get off. I make moves, but then I miss certain friends, and apparently they only want to communicate via Facebook. I've made some changes, but still haven't found a comfortable balance. Still a work in progress.
Thursday, January 05, 2017 9:43:00 AM

Sue said…
It is amazing to me that so many of us, perhaps women of a certain age, have come to the same conclusions and actions. I unfriended many and unfollowed many more, and came to the same conclusion that the people with whom I agree are as upsetting as those with whom I disagree. I tried quitting facebook for a while but found I missed the quilty content and friendly news. I also stopped Huff Post and relied on Washington Post but have even found that too upsetting lately. I am going to bury my head in the sand, or better yet, in my sewing room.
Have a good new year, Nancy, we are all in this together and there is some comfort in that.
SSS
Thursday, January 05, 2017 10:26:00 AM

Sue said…
It is amazing to me that so many of us, perhaps women of a certain age, have come to the same conclusions and actions. I unfriended many and unfollowed many more, and came to the same conclusion that the people with whom I agree are as upsetting as those with whom I disagree. I tried quitting facebook for a while but found I missed the quilty content and friendly news. I also stopped Huff Post and relied on Washington Post but have even found that too upsetting lately. I am going to bury my head in the sand, or better yet, in my sewing room.
Have a good new year, Nancy, we are all in this together and there is some comfort in that.
SSS
Thursday, January 05, 2017 10:27:00 AM

Barbara Anne said…
Yep, me too. My privacy settings are all sky high (set up by DS1) and I visit only his FB page and that of his sweetie. Seldom, at that. I'm not holier-than-thou, but I don't want to get sucked into spending all too much time there. My limited energy is needed to imagine quilts into reality (love it!) and reading when I'm too tired to do anything else.

Waiting for snow here, perhaps 2" to 6" between late this evening and late tomorrow evening. I look forward to that awareness - upon waking - of a different light and a silence in the world because we've gotten SNOW!! No matter what your age is, is there anything better than a snow day?

Pamela Kieffer said…
I still enjoy Facebook. I have found some dear lost friends, it's so nice keeping up with them though we are miles apart.
Sunday, January 08, 2017 12:06:00 AM

Annie said…
I left Facebook more than a year ago even though I'd found some long lost relatives there. It got so I felt it was a big waste of my time to get on FB and read all the drivel people posted. I had thought it was a place where I could keep up with the doings of friends and family, but it didn't turn out that way. I was long gone from Facebook before the election and I'm really thankful for that!
Wednesday, January 18, 2017 9:32:00 PM

Lynn Dykstra said…
I signed off of Facebook for lent the last two years. I may just add another 10 days to the forty and sign off early this year.

suz said…
Just had the opportunity to catch up on your blog entries - broke my arm Thanksgiving Day and haven't been on the computer much...This entry hit the nail on the head for me. I have posted on Facebook a couple of times pleading with people (on both sides) to stop all the negative stuff and the fake stuff - to no avail. I resisted responding to some of the junk until today. Someone I truly respect posted something so stupid and so obviously fake that I felt I had to say something...and all I said was that posting something like that was not productive. For 20+ minutes I got horrible responses and accusations from people who don't even know me! Frankly, I felt it proved my point, but knew that any further response from me would just make everything worse. So, I Googled how to delete posts that weren't mine. I discovered that there is a little drop-down arrow in the upper right corner of the post and you can just "hide" the post without defriending someone. So, if I see anything remotely political, I instantly "hide" it. I love the post from my Australian friends and the quilting and creative stuff, so I don't want to give up Facebook, just the political garbage.
Sunday, January 22, 2017 3:26:00 PM

Rocket Man said…
Scary, so glad you bought this up!