A Letter to Lloyd 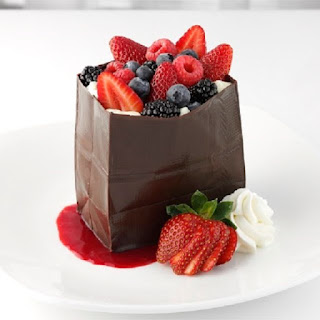 This is a picture of a chocolate bag, a “recommended” dessert at McCormick & Schmicks restaurant. But I am getting ahead of myself.

It’s been a busy week here in Lake Woebegon — erm Near Philadelphia. All good things but too darned many of them.

The high point of the week was Thursday night, when we went downtown. The Philadelphia Orchestra had a three-day Rachmaninoff festival, and we were fortunate to have tickets for the first night when two different artists each performed one of his piano concertos (the Fourth and the sublime Second). The Orchestra’s organization made quite an event of this festival. Mr. Rachmaninoff's great niece was present, introduced on stage, and spoke warmly about Uncle Sergei. Each concert was preceded by a short play written for the occasion and involving characters from music history of Sergei’s time and each concert was followed by a brief offering of his chamber music. Alas, we decided not to attend any of the pre or post events. It was a very full week, and we needed our sleep.

The City of Philadelphia was all aflutter over something called the N F L Draft, which one or both of you may know much more about than I do. Why, we do not know, but the Art Museum steps and the entire Benjamin Franklin Parkway and for blocks around were shut down from traffic for the whole time. Radio people warned us constantly not to attempt to drive into the city. The public transit was adding trains, we learned. So despite Joe’s misgivings, we drove to our church and parked and went to the adjacent train station where the platform was crowded with people wearing green Eagles shirts, many of which had a name, not the wearer’s own, on the back. Some people were dragging along elementary school children. The air was festive.

We preceded the concert with dinner at McCormick & Schmicks where we shared an unconventional, tasty, but not memorable or traditional Caesar Salad and individual glasses of wine. Joe had a gigantic filet of salmon stuffed with teensy shellfish delicacies in what he said was a succulent sauce. I had the Chilean sea bass (I did not ask to see its credentials; for all I know it may have been from Argentina or Ecuador) with a glorious mushroom risotto.

I didn’t think dessert was necessary but Joe persuaded me that I should share something he would order. And, of course, he went for the Chocolate Bag. This concoction appears to be a bag made out of chocolate and, indeed, that is what it is. And it is filled with white chocolate mousse. And a variety of fresh berries. And sitting in a puddle of raspberry puree. Several times during its consumption, Joe mentioned how much Reberta would have enjoyed it. We both worked very hard to put it away, too hard it seemed later, but left a full third of it on the plate. We felt like failures but our charming waiter assured us that we had done admirably and drew our attention to an entire FAMILY in the corner struggling with THEIR chocolate bag. It was good.

It was unseasonably warm and, of course, we had a much longer walk than usual to the Kimmel Center, and although we arrived in plenty of time, the combination of all of that mousse and the long trek and the humid air made us feel a bit unwell as we took our seats.

After the concert we took a cab to Suburban Station where the transit system personnel were in jovial, good-natured form, the trains were not running on time but not-to-worry additional trains had been scheduled (also not running on time). Once again, we were the only people in “civilian” clothing; everyone else (including people up way past their bedtimes) was wearing Eagles apparel except for a guy who sat alone in his New England Patriots shirt. No pushing, no shoving; people were in good moods — apparently whatever the N F L Draft is, it had gone well.

So that is my report. It was a very different evening out and utterly pleasant. A gorgeous summery night, the company of many, many people unlike ourselves, a scrumptious dinner, and a beautiful concert. Life is good. Come to Philadelphia to visit! We'll gladly show you around downtown and even take you to McCormick & Schmicks if you like. But if you want the Chocolate Bag, you're on your own. Bring $14.

Quiltdivajulie said…
I heard about that N F L thing on the museum steps -- great way to highlight a museum but clearly a pain for those who live/work in the area. A Chocolate Bag -- hmmmm -- must show this to our DIL and elder son who are huge fans of unusual chocolate desserts.
Monday, May 01, 2017 8:56:00 AM

Carol- Beads and Birds said…
Such a wonderful and eventful outing. I love a big city. Born in Chicago and raised in a beach town in Indiana, I go back to Chitown as often as I can. Alas, my husband is a farm boy and shies from the city. But I have shared MANY trips to Chicago to plays, shopping and museums or just walking and watching with my daughter who loves the town as well.
xx, Carol
Monday, May 01, 2017 10:16:00 AM

Millie said…
So who are Lloyd and Roberta? Did I miss something?

Barbara Anne said…
Sounds awesome and oh, so very filling but I'd love a smaller meal and that concert!

Decades ago, my sweetie (for 45 years, my DH!) took me to see Arthur Rubinstein in one of his last concerts. Awesome in ever sense of the word - except that I had a sprained ankle and we had nose-bleed seats!

So glad you two had the opportunity for such an amazing evening!