Alison Meets Tula in My Studio 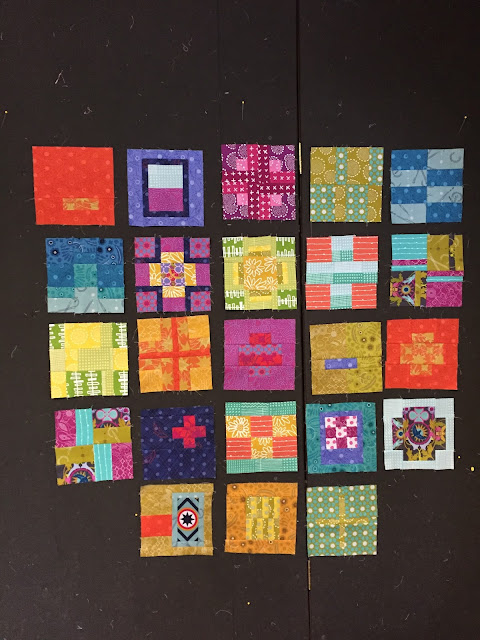 A couple of weeks ago, my friend Sharon came to spend a couple of days Near Philadelphia. She had planned to go home to New England on Wednesday but I told her she had to stay until Thursday, at least. Because Wednesday was the opening of the quilt show out in Lancaster. It wasn't hard to persuade her.

So that Wednesday Bobbi and Sharon and I went to Lancaster with our credit cards burning holes in our pockets. The show had lots and lots of "wall quilts," which -- as usual -- were mostly what I consider "fabric art" rather than "quilts." Whatever. The full size quilts were pretty nice and there were more of them than there had been in previous years, I thought. The vendors pretty much left us cold. I had no idea there were no many long arm manufacturers. They and the various sewing machine dealers took up most of the space. There were a couple of bright booths of Kaffe Collective fabrics, but I didn't buy there because I could almost open my own stand of KFCs. I bought a tiny gizmo for cutting thread on airplanes and a yard of lobster red batik to bind my Lady of the Lake, and I think that's about it. The others were pretty empty-handed, too.

So we headed home and Bobbi wisely suggested we stop at what we always called the Renegade Mall -- the vendors at the Continental Inn across the street from where the Lancaster Show used to be (shout out to Marsha!). We wandered around and Bobbi found some brights on whites that she needed and we were about done. And then, reader, then we came across the booth for Amelia's Garden and, by gum, did Amelia have brights! We were all drawn in like moths to a lightbulb. Amelia was featuring gorgeous bright prints by Alison Glass. Everyone bought at least one packet of F8s. I bought three.

Day before yesterday I had the chance to cut into them. They are perfect for those Tula Pink blocks that I adore. I've thrown in some additional brights to detract from that totally matchy-matchy look. And I've only just begun.

Nann said…
Why does the fabric look even more enticing when it's on display at a quilt show? (Or across the street from a quilt show, as in your Renegade Mall.) Something about the immediacy of all that design and creativity. Isn't it great when one designer's fabric line goes so well with what you have on hand?

Barbara Anne said…
Oooohhhhhh! How loverly those happy bright blocks are! Well done in branching out to wonderful fabric stores that are away from the show. A delightful day out with friends made more delightful by perfect fabric finds!

Sad that the long-arm vendors took up so much of the vendor space since few folks can afford any machine that large or that costly. Show organizers should take that into consideration.

Tanya said…
How nice to find perfect fabrics for a project! It is disappointing to go to a show and not find inspiration.
Monday, April 17, 2017 4:24:00 AM