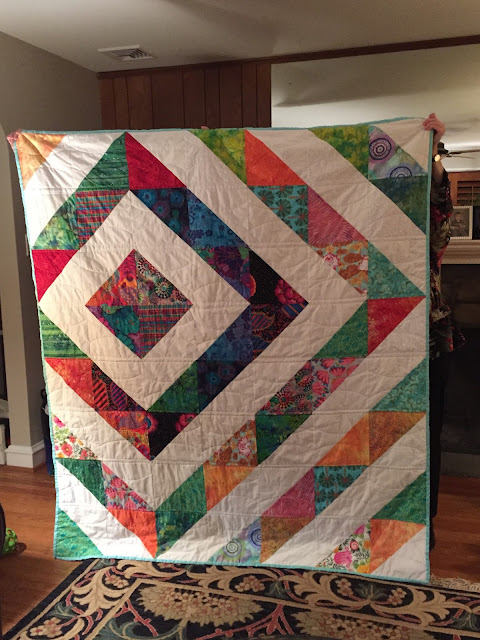 For me, 2017 has not had the best of starts. The first quarter of the year was filled with sick and injured friends. Too many to list.

But we're into the second quarter now, and things are brighter. The young mom with breast cancer has had her surgery and her pathology has come back clear. Yesterday, another woman with breast cancer rang the bell at her treatment center to signal that she's completed her radiation. Again, her dissection margins are clean. The hospitalized Circle sister was discharged, spent a couple of weeks in rehab, and today will move back to her apartment. The broken ankle lady is back to work.

That leaves one. Another friend who was taken sick on Christmas Day, has been through weeks of hospitalization, more weeks of rehab, and continues to recover at home. Early in her saga, a group of friends decided that she needed a Comfort Quilt and blocks were begun and tasks claimed. Then, as often happens, life got in the way for some of the makers, and the quilt wasn't completed as quickly as we had hoped.

As you can see, it is finished. Made by ten women from three states. It was delivered to the eleventh yesterday. Her healing process will now accelerate.

Janet O. said…
So glad to hear of the change in direction things are taking in this second quarter!
Also, I was excited to see the quilt pattern you used! This is the design my Mom chose to use for the quilt I am making her from Dad's shirts. I haven't started cutting yet because I can't decide how large to make the blocks. As a point of reference, do you recall how large the blocks are in this quilt?
Friday, April 07, 2017 12:53:00 PM

Barbara Anne said…
So glad to hear that many of your sick or injured friends, neighbors, and others are on the mend, celebrating clear margins or the end of treatment, and that one special lady has a lovely quilt of HSTs with love in the stitches from her friends to encourage her as she heals.

Carol- Beads and Birds said…
It is a wonderful and colorful quilt. I believe that with all those quilters helping to create it, it is filled with healing energy to speed her recovery. Let's hope the second quarter is better for all of us.
xx, Carol
Saturday, April 08, 2017 8:11:00 AM