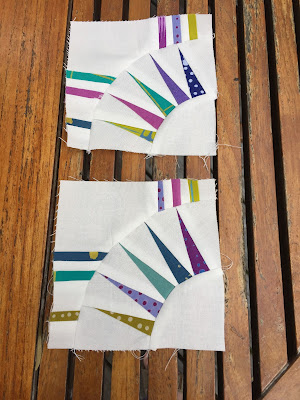 I spent much of this morning making these two blocks. I'd acquired the pattern last week and had some scraps that were just the right size, and so I dug in.

The two blocks took three washer-and-dryer loads to finish. I didn't measure them, but I believe they finish at six inches. And the top one really is straight and not on an angle for the left side. I think.

When I was nearly done, it occurred to me that a color scheme of red-orange-gold-yellow on black would have been more appropriate for today.

The eclipse was mostly clouded over here in my part of Near Philadelphia. I liked looking at NASA's footage from South Carolina, and thought fondly of my friend Lori in Madras whose town is suddenly the place to be!

Barbara Anne said…
What interesting blocks and so appropriate for yesterday's cosmic event! Should you call these blocks "Far Out"?! :)

We were supposed to be in the 90% range but what we noticed most was the weakening of the sunshine and the lessening of the lines between sun and shade. The cats were unsettled thru the afternoon and wanted to be indoors most of the time. How humbling to be witness to such a precise, on-schedule dance in the Universe.

I'm making what seems like a bazillion mostly purple HSTs for a Black Opal quilt from the book "Spectacular Scraps" by Judy Hooworth and Margaret Rolfe. Yes, I probably need my head examined.

Like these blocks very much! We were at 93% here and were surprised at how bright the sunshine remained even at that level. Blurrier than full sun but the mini crescent sun shadows on the sidewalks were the best!
Wednesday, August 23, 2017 8:27:00 AM

Janet O. said…
I did a mini Mariner's Compass a few years ago in those exact shades you mention. And I hung it in my sewing room just before the eclipse.
Those blocks don't go together quickly, do they? I like how you judged the time. They sure look good. Are you planning to make a whole lot more?
We chased the eclipse in Idaho, and had a marvelous time!
Wednesday, August 23, 2017 3:16:00 PM