The Need to Do the Same 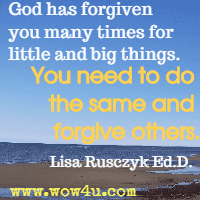 Not quite six months ago, a friend attacked me verbally. She is a very bright woman, and her vitriolic words were carefully chosen to reach my most vulnerable place. Her main assertion -- among other terrible insults -- was that my spirituality was a sham. Her aim seemed to be as hurtful to me as she possibly could.

My initial response was to dismiss her words. "I know who I am," I thought. And said. I wasn't hurt, but rather stunned.

Then began a period of doubting and questioning. Was there any truth at all in the accusations she had made?

This is a woman who I had ministered to -- many times -- during the course of my work as a hospital chaplain. A woman who asked her husband to call me each time she entered the hospital. A woman who clutched at my hand and asked, tearfully, "Will you pray with me?"

And then, suddenly, all of that was dismissed as "fake."

My period of introspection and conversations with others who have known me a long time allayed my fears. I do know who I am.

Some have suggested that she is mentally ill. Others have pointed to a lengthy pattern of becoming close to someone and then lashing out in a horrible way. There are other theories. But it doesn't really matter now what is going on for her.

What matters is what happens next for me. I haven't seen her for more than six months. But it is inevitable that our paths will cross again. To know how to move forward, I've been reading and studying about forgiveness, gathering a collection of insights from minds far better than mine:


All good thoughts. Some better than others. And then, of course, there's the real reason: Forgive us our trespasses as we forgive those who trespass against us.

I'm working on it.

howdidIgethere said…
Not easy. I know from another situation. But we can strive to move forward, especially as women of faith.
Tuesday, August 13, 2019 4:16:00 PM

Patty Nordahl said…
You always give me a lot to ponder, oft times when there is a correlation to something in my own life. I am keeping your list of different thoughts on forgiveness for future reference. Once again thank you for the insights you provide.
Tuesday, August 13, 2019 4:56:00 PM

Robby said…
I'm so sorry you had this experience, but glad to see you've turned it into something positive for yourself. This is a challenging area for me sometimes.
Tuesday, August 13, 2019 8:39:00 PM

Janet O. said…
Thanks for sharing your journey and insights. That is a tough situation.
I am currently trying to find forgiveness in my heart for a distant cousin with whom I had been very good friends for decades.
For two years now she has ignored my existence and thwarts my attempts to contact her--even brushing past me at church when I am trying to talk with her, not acknowledging my presence. Don't know what I have done, but apparently it is unforgivable. Still, I need to forgive her and not let this eat away at me. Your experience and gathered wisdom has given me the boost I need to keep trying to truly forgive, rather than just trying not to let it bother me, as I have been doing.
Wednesday, August 14, 2019 12:28:00 AM

Carol- Beads and Birds said…
I have a sister I haven't talked to since 1980. She did something to me so horrible I am unable to overlook it. I cut all ties and feel fine about that. I don't dwell on all she did to me and can only shake my head in wonder of how I was so blind.

There are just a few other people that I avoid for having hurt me deeply.

If I say I can't forgive them, but don't associate with them and am no longer hurt by what they did why do I have to forgive? Why befriend them again and set myself up for more pain?

suz said…
forgiveness is one of the hardest things we have to do as humans, but I really do believe it is more important for our own well-being than anything else.
Wednesday, August 14, 2019 10:05:00 AM

Ruth said…
As this post says, Forgiveness is not about the other person so much, but about the anger and pain in our own hearts. When we can forgive another person (sometimes it takes years!) then we are saying, "God, I am ready to forget all of this and put it behind me. I forgive this person for all the pain they have caused me. Thank you for helping me to let go and stop thinking about this."
There is no rule, law, scripture, policy, etc. that says, "and I will be friends with them again."
No. We do not have to be friends again. We don't have to speak to them again. We DO have to treat them politely in speaking, in passing, in family affairs -as we want God to treat us, you know. Because God says in Matthew 6:14 "For if ye forgive men their trespasses, your heavenly Father will also forgive you."
Matthew 7:12 "Therefore all things whatsoever ye would that men should do to you, do ye even so to them..."

Anonymous said…
Forgiveness is a choice. I choose to forgive but the pain and anguish takes time to fade. I remind myself to every purpose there is a season. Sometimes relationship have seen their "season". And that loss makes room for a new harvest of friends. We can mourn our loss and be thankful for the blessings of that relationship. But we must move on for our own well being. Jesus, said "ye without sin cast the first stone." My sin would probably be more like a boulder so forgiveness I must choose. Pray for her so that she may be right with God.

Quiltdivajulie said…
Another strong and thought-provokig post. I feel pity for the woman who lashed out at you - she must be hurting terribly to accuse you of being fake. And I pray that you can find peace and forgiveness in your own soul ... not easy but very important for your well being.
Wednesday, August 14, 2019 4:43:00 PM

Barbara Anne said…
This week I read this:
"You cannot change the way the wind blows but you can adjust your sails."

As hurtful and unexpected as that woman's words were, you've done well to consider what was said and to consult others in the time since it occurred. You've found peace.

howdidIgethere said…
I was once told that forgiveness is giving up all hope for a better past. Interesting idea, I think.
Thursday, August 15, 2019 6:47:00 PM

Lori said…
Hi Nancy, because you likely will cross paths it is good to have forgiveness in your heart so you can get past it once you see her again.
What she does, or how she responds, is not your business. It doesn't mean it doesn't hurt you, as it may for some time. I'm so sorry.