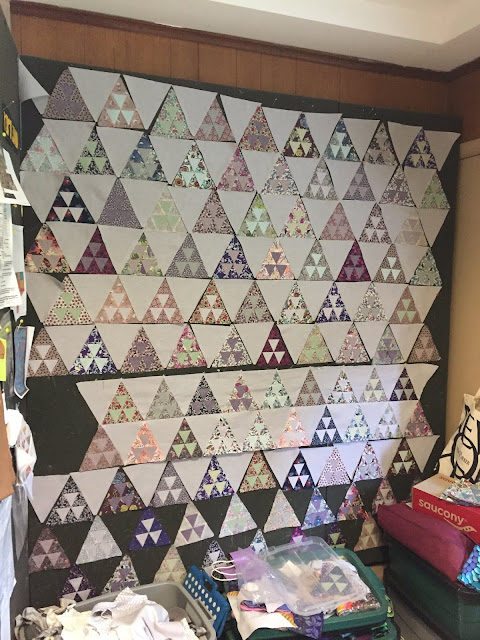 This isn't really Post One of Triangles. I wrote about them here, back in April, when they were just getting started. I had made fewer than half a dozen of them then. You can see how many I ended up with. They are made from scraps of Liberty and Essex Linen of several different colors. They were my late spring/early summer project. My friend Bobbi drafted the pattern for the paper-pieced triangles for me and I happily hummed away on them. When they were all completed, I couldn't figure out which of the Essexes was the one I wanted for the solid triangles. I mean, I knew which fabric, but didn't know its name. I sent a scrap to one of my favorite enablers on-line fabric sites, Nicole, who told me it was called Heather but she wouldn't have it in stock for a few weeks -- could I wait? I could. The yardage came early last week while I was busy with Fractured. When that was off the wall, I started cutting.

At last, triangles went up on the wall. Were moved here. Were moved there. Were finalized. I am so proud of myself that I had the sense to Google "sewing isosceles triangles together" before I did something dumb. I read a couple different approaches and yesterday bravely started a row. It took for ever to get it half assembled. I just couldn't get into the rhythm of it. But this morning, I did. I finished that row and did a second. Took a lunch-and-nap break. And then decided to see if I could possibly sew the two rows together. Precise pinning was key. Thirty pins later (none of which were swallowed), it was ready to stitch. I took a deep breath and plunged in. And did it! I could hardly wait to tell Bobbi, who has more confidence in me than I have in myself (sometimes I have to borrow from her; this was one of those occasions)! 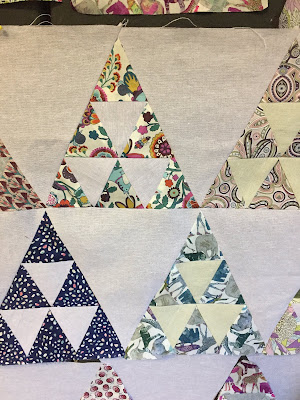 This isn't going to be finished any time soon. The work is painstakingly slow and definitely not to be undertaken when the least bit tired. I can do it. I can do it!

Barbara Anne said…
Well done! What a delightful quilt you are creating. So glad your needed fabric came back in stock.