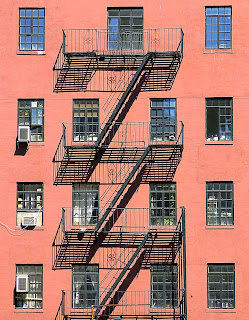 This morning I received an email from Honna who reported having had a dream wherein I had climbed up an incredibly tall pole to retrieve some sort of odd ball that was balanced on the top. She couldn't watch the climb; she was so worried about my safety.

It sounded to me as though the dream was rooted in a combination of Harry Potter and New Year's Eve on Times Square. It was a scary dream to me inasmuch as I have never been good with heights.

Honna's dream brought back a memory and also got me to thinking about how we don't really know sometimes how we impact another person.

Nearly thirty years ago I was a member of a chaplaincy learning group at an inner city hospital. My work was concentrated on two consecutive floors of the oldest building in the complex. The elevators in that building were so notoriously slow that virtually everyone used the outside fire escape to go from one floor to another.

The work of a hospital chaplaincy learning group is intense and it is stressful. It is not odd that the work would figure in the learners' dreams. One night I dreamed that I had gone out onto the fire escape to go up to the next floor and to my horror, the railings around the platforms and the stairs were missing. It was terrifying. I can't remember any more of the dream, but trust me when I tell you that even typing this account of it has made my hands perspire with anxiety.

During morning report the next day I shared my dream with my group mates. They commiserated with me as to how scary the dream had been. We went on with the group work and did our planning for the day. At the conclusion of the meeting, when it was time to go to our floors, one of the group members said she was going to walk over to my area with me and go out on the fire escape together. She said she knew it would be hard for me to do it alone. We took the bridge that went from the one building to the other on the sixth floor and opened the door to the fire escape to go up to seven. And the railings were all there, right where they belonged.

I doubt that Gail has ever given that morning another thought. But, as you can see, so many years later, her kindness meant everything to me.

Barbara Anne said…
This is so interesting and I am belatedly glad that Gail had the insight to know it was important that she go with you to the fire escape.

Janet O. said…
I don't enjoy heights either, and I know how scary that would be to me. Of course you remember what Gail's did for you. She showed empathy, as well as kindness.
Tuesday, December 29, 2020 12:46:00 PM

Robby said…
The empathy some people carry with them daily just stops me in my tracks. I'm afraid that is not one of my traits that people might notice, but I am grateful for it when I see others use it in such subtle and remarkable ways.
Tuesday, December 29, 2020 2:47:00 PM

Quiltdivajulie said…
I love it when you share posts like this - reminders to think about how we might be able to help someone by doing even the smallest or seemingly insignificant things.
Tuesday, December 29, 2020 10:19:00 PM