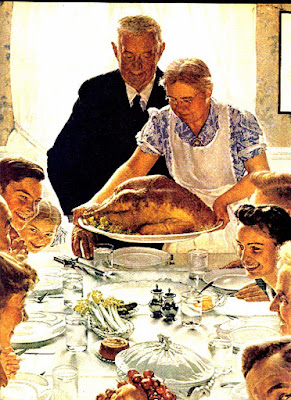 Last evening, Himself and I attended -- for the first time -- the community interfaith Thanksgiving service. It was held at our church and the worship leaders included priests, pastors, rabbis, nuns, vicars, and a Muslim gentleman. It was lovely to see the focus on what we have in common rather than where we differ. The music was wonderful. The three traditions -- Muslim, Judaism, Christianity -- each had a speaker who read a passage from scripture followed by a reflection on that passage.

The first reader was a rabbi who chose a lengthy Old Testament text about Jacob and Esau and their rivalry. She referred also to that of Cain and Abel, and spent a lot of time talking about the evils of parental favoritism, even cautioning against favorite grandchildren.

The next reader was a protestant minister whose selection was the story of the prodigal son, another tale about a dysfunctional family and sibling jealousy.

I thought these were odd choices for two days before Thanksgiving! But the newspapers this week have featured articles about avoiding conflict at the turkey table and the advice columns have been filled with complaints about yet another holiday with a distasteful relative.

I'm happy that we'll be having Thanksgiving with one branch of our family on Thursday and another on Friday. I can't wait to be together. I'm blissfully unaware of any familial strife or discord. Listening to those preachers last night made me wonder if I am blessed or in major denial. I'm choosing the former.

Barbara Anne said…
Go with the former. If there were past conversations and/or facial expressions that were irate, you'd no it.
Two Thanksgiving dinners means you're doubly blessed.

Anonymous said…
Strange reflections for Thanksgiving.. rather it seems, it would be more appropriate to speak on “ in all things and ways give thanks!” For no matter. The trials we face there is always something that we can find for gratitude. The writing on a wall during the holocaust, Even If I can not see the Sun, I know it is there. Even I do not feel it I know that there is love, And even if God is silent, I still believe.” Sorry if I did not get it perfect, but you can get the idea.
Happy Thanksgiving.

Quiltdivajulie said…
Interfaith gatherings are something younger son has very much enjoyed attending and it is so interesting to hear his take away thoughts. Like you, I am blessed to be part of a family without animosity. I hope you and Joe enjoy both of your feasts with family and please know I am thankful for you and your always well-thought out posts.
Wednesday, November 23, 2022 10:34:00 PM

Nann said…
Well, the not-so-usual reflections made you and the others pay attention! Enjoy your family gatherings this week/weekend.
Thursday, November 24, 2022 11:00:00 AM