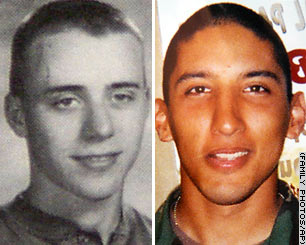 When I read in this morning's paper about the two young American soldiers who were missing, I noticed right away that Thomas Tucker was from Madras, Oregon. Madras is the home of my cyberfriend Lori. I wondered if Thomas was a friend of her daughter. I wondered if Thomas shopped at her auto parts store. Or perhaps he sang in the choir at her church. Maybe he was the guy nextdoor. I said a prayer for him, and for his fellow soldier, Kristian Menchaca, and thought I'd write to Lori later today to see if she knows the Tucker family. My sense is that Madras isn't a huge place.
. . . .
Then I came to work and booted up the computer. As it does everyday, it opened at the CNN website. And there I saw their photos and the news that their bodies had been found.
. . . .
Some weeks ago I had begun to believe that I'd become dulled to the news of Iraq. That there had been just too much awfulness to feel the impact. It was only when I'd talk to Sherron and hear about her friend's daughter Julie, a West Point graduate, who I last saw as a 6-year-old, going back for her second -- or was it third -- tour in the Middle East, that the reality of it all would zoom in.
. . . .
I look at the photos of Thomas and Kristian and realize that although they are younger than my sons, they and the other soldiers serving our country in Iraq, might well have been friends of my sons. Or my daughter. It could be Dan or Ryan or Ken, Matt, Petie or Tim over there; it could be Kathy or Joanna or Rebecca. Had we been unable to help our children with college, it could be Sherry, Andrew, or Tom.
. . . .
And it all hits home. Thomas and Kristian are somebody's neighbors, somebody's children's friends, somebody's sons. In their early twenties, their lives cut short. Cut short -- for what?
. . . .
Mr. Bush, these young men could have been friends of Jenna and Barbara. Does that realization have any impact on your thinking?
. . . .
Please, Mr. Bush. We've sacrificed way too many of our young people already. This war needs to stop.
Email Post
Labels: Thinking