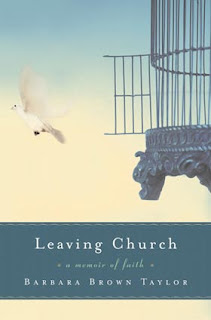 When Sharon was visiting last month, she mentioned this book. It sounded mildly interesting and I made a mental, though not written, note of it. Within a week, I'd read references to it on two different blogs, and came to believe this book was being placed in my path to pick up or stumble over. So I reserved it at the library.
. . . .
Barbara Brown Taylor is an ordained Episcopal priest who left parish ministry to teach at a college. The book is is the story of her faith journey. She is an excellent writer, she is my kind of theologian, and she appears to be very approachable. I made many notes from her book.
. . . .
Three, in particular, are meaningful for me right now.
. . . .
On page xiii she writes, "I was about to go and do what I believed God was calling me to go and do, without the least suspicion that finding my life might involve losing it – or that loss, in the end, might be cause for praise."
. . . .
On page 41 she quotes a priest whom she consulted when she was thinking of going into ordained ministry. This person told her, “Think hard before you do this. Right now you have the broadest ministry imaginable. As a layperson, you can serve God no matter what you do for a living, and you can reach out to people who will never set foot inside a church. Once you are ordained, that is going to change. Every layer of responsibility you add is going to narrow your ministry; so think hard before you choose a smaller box.”
. . . .
And finally, on page 122, she quotes Walter Brueggemann: “The world for which you have been so carefully prepared is being taken away from you by the grace of God.”
. . . .
There is a great deal more rich material in her book; there are a great many more notes. But the three I copied above speak to the bewilderment I experience at my own faith journey.
. . . .
It has been nearly twenty years since I felt that God was calling me to hospital chaplaincy. At that time, I had no credentials whatsoever, just this belief that being with the sick, with those in crisis, was to be my ministry. At the age of forty-something, I left a job I enjoyed to begin college -- a bachelor's degree was required for entrance into seminary, and I completed one in two and a half years.
. . . .
I never felt called to parish ministry. I did not want to marry, to bury, to preside at the table. But at that time, in my denomination, the path to hospital chaplaincy required ordination and three years of service in a congregation. I decided to embark on the path to ordination; however, in my final year of seminary, when I was an intern who was to be paid for being on that path, my conscience intervened. I did not know what I was supposed to do, but I knew I was not supposed to continue the pursuit of ordination. It was wrong, morally wrong, for me to plan to serve a congregation for three years simply to fulfill a requirement for my own call.
. . . .
After graduation, I decided to gain more experience in CPE -- Clinical Pastoral Education -- where I spent two years at two different hospitals, serving as a student-chaplain in a diverse learning group. Far from being compensated for this work, I paid tuition. I learned. I ministered. I laughed and cried and struggled. I loved it.
. . . .
I accumulated the four units that were required to get a job as a hospital chaplain. I had good evaluations from my peers and supervisors. What I lacked, however, was the denominational endorsement.
. . . .
It was during the CPE years that the ELCA created a new pathway to rostered ministry -- the diaconal route. The requirements were stringent, but with my seminary education and CPE credits, I had completed most of them. I entered "the candidacy process" for a second time, this time on the diaconal path.
. . . .
It was not to be.
. . . .
About six weeks ago, I wrote this blog post -- http://nancynearphiladelphia.blogspot.com/2007/04/just-piece.html -- which touched on the struggle I have experienced, trying to resolve just what this perceived call had been about.
. . . .
I don't know that I'll ever totally figure it out. But reading Taylor's book has helped. And the three pieces quoted above are what I'm chewing on these days. The ways of God are mysterious -- I knew that from the get-go.
Email Post
Labels: Books Thinking

NoVA Dad said…
This is a wonderful post! I, too, have been really touched by Taylor's writing (I had written a review of "Leaving Church" on my blog last year), and have enjoyed finding and reading her other books. If you're interested in actually listening to her preach, the National Cathedral website (www.cathedral.org/cathedral) has a video archive of two appearances she made there last year, along with one by Frederick Buechner -- another phenomenal writer and preacher. I think you would enjoy them. Also, you can learn more about her at www.barbarabrowntaylor.com, and a Google search will bring up several podcasts of interviews and sermons she has done over the years.

As an aside, I found your blog after doing a search for other posts about BBT that people have written; hope you don't mind, but I'm going to link your blog to mine for repeat visits.
Tuesday, June 12, 2007 1:04:00 PM

LoieJ said…
Each path we take opens some opportunities and closes some others.

But if you have a talent and a perceived "call" to this area, there "should" be a way to persue it.

I guess that is why some people change denominations; too bad.

I have a friend who is an AIM. Her job is practically the same as an ordained pastor with less pay. She said that she wasn't required to take CPE but she should have.

Is becoming an AIM a possibility?

That friend didn't have to do an internship. But another friend who is an AIM did do an internship but never got a "call." Too bad there as well; God given talent being wasted by what is perceived to be the bishop's office's unsympathic view of AIMs.
Tuesday, June 12, 2007 2:41:00 PM

Mrs. Goodneedle said…
For some reason I think you were meant to read this book at this time. God is working through you during this internal struggle, I know you've been in conflict over this situation of where you're supposed to be. The book sounds insightful and compelling; I'm happy that you found it. You've helped me enormously with some problems of my own, I'm happy that you've been exactly where you were at the time and not in a "smaller box". Hugs, Nancy!
Tuesday, June 12, 2007 9:41:00 PM

Tanya said…
The second quote your wrote for some reason calls to me. I've never thought about ministry though I've thought that if I ever went back to school I'd certainly like to do more Bible study, study in the original languages, learn counseling. Some of the things that are associated with seminary I suppose. But to think of going into the ministry as limiting... That is an interesting idea. How true though that there are people who will talk to me and perceive my life who would absolutely never be caught dead in a church situation. Thank you for this insight.
Thursday, June 14, 2007 5:22:00 AM

Your post has touched me deeply. I have Taylor’s “Leaving Church,” but have not taken the time to read it yet.

Just this month, I have begun field observation in hospital chaplaincy for my undergraduate degree in Human Services Counseling. I have thought for quite some time that this is where I need to be. I have not entered seminary yet, so my work in chapliancy for now is more of observation, but I have sat, laughed and cried already with several individuals. My favorite part thus far has been the hearing of stories – stories of journeys that have included believing, doubting, fearing, questioning, rejoicing, hurting and embracing – stories that in some unique way connect us all. For me, that is a great joy of hospital chaplaincy. Hopefully, I will begin seminary in 2008 and gain more experience in this unique field of human service.

I too have doubted that my calling is in parish ministry. I have worked as an interim pastor and youth minister, and enjoyed them both. Much of my doubt, however, I feel stems from the fact that I am gay, and I refuse to live in the closet any longer, hence, it may be difficult finding a church who wants an openly gay pastor.

I was kicked out of my youth ministerial position at a Baptist church on the basis of my sexual identity. I was asked by the pastor to never return – period. I had given SO MUCH to this congregation. Youth members, parents, and other parishioners were calling me asking why I left. Apparently, the pastor simply told the church that I resigned and they needed to fill the position. I didn’t tell the teens, parents or other parishioners what had really happened – I DIDN’T FIGHT BACK. I left that in God’s hands. As a follower of Christ, I felt as if I had to!

My ordination board does not know of this incident – yet – and when they do, I know that my ordination under the independent Baptists will be revoked. But, that’s fine. My calling comes from God, not from men!

The church has beat people up so much. I have such a love/hate relationship with the church. There have been times when I’ve said I’d never set foot in a church again. But, I still find myself there. Lol. …thanks to a loving faith community who has accepted me just as I am.

Nancy, people like you who know deep hurt and who also know firsthand the pain that the church can inflict on individuals are certainly well suited for hospital chaplaincy. You are able to feel their pain and their hurt. You are able to understand. And THAT, my sister, is ministry!!!

May the God whose hands are always open and whose arms are always spread, offering love that never gets tired, hold you closer than you’ve ever dreamed possible as you continue to understand and search!
Thursday, June 14, 2007 12:09:00 PM

Susan said…
You know there's always the possibility that you needed all this for some other calling God will send . . . or a calling in the next world. You don't think he's going to let you just get away with sitting around strumming a harp, do you? =)
Thursday, June 14, 2007 3:54:00 PM