A Letter from a Stranger 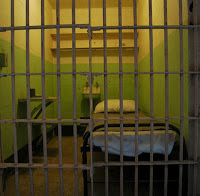 I'd been out of the office for a couple of days, and then there was the weekend. So the pile of mail in my box was quite large. It is Commencement week, and there is a lot to do; but there are still some positions to fill, so the mail and the resumes the envelopes would contain had to be a priority. I stacked the envelopes, slit them, and began pulling the resumes out. I was only a little bit surprised when one contained four hand-written pages on lined paper -- I've written before about some of the strange responses I receive for an advertised position.
. . . .
The letter opened with a salutation, and my full name. The writer was not applying for any of the vacancies I'd advertised in the past few weeks. Rather, he was a prison inmate who'd seen my name in one of the ads, and decided to invite me to be a penpal. He went on to tell me of his offenses -- a little cocaine here, a car theft there, some petty thievery, a bit of aggravated assault. He spoke of being lonely and hoping I was the kind of nice person who would want to correspond with him.
. . . .
I'm not.
. . . .
My stomach contracted. My chest tightened. I felt invaded, threatened, and a little bit dirtied. I felt revulsion, horror, and shock. I wanted this not to have happened to me.
. . . .
He spoke of his loneliness, about his childhood of abuse -- though not using that as an excuse; he talked of his few possessions (toilet articles and soup) and how long he had been in prison (thirteen years this coming September). He wrote of the desperation for companionship that drove him to write to a stranger, a person advertising for a teacher of Middle School Spanish. I thought of how sad his life is. I wondered, too, how many of these letters he has sent out, and whether anyone ever wrote back.
. . . .
Getting past my sense of shock, while driving home I thought about how each of us has made some bad decisions, some poor choices, at some time or another. I thought that he just made a few more than most of us. I thought about a dear cyberfriend who has a son that has been in and out of jail a couple of times, and tried to think if I would feel differently if the letter had come from him. But it hadn't, and I couldn't figure out whether I would have more compassion for someone I "sort of" knew.
. . . .
My correspondent said nothing suggestive or offensive. He did not ask for money and there was nothing sexual in his content. Nevertheless, I felt this very unpleasant sense of intrusion. My life has been fairly sheltered, and all at once I feel slightly less safe than before.
Email Post
Labels: Thinking

atet said…
9 chances out of 10, it's a con. I have a friend who used to teach at a minimum security prison and while he even liked some of his students, there is a reason why he still has an unlisted phone and address. He does not want any of his "felons" looking him up when they get out. Don't feel guilty for not wanting to have contact with this person -- you didn't ask for the letter, nor do you have to respond to it.
Tuesday, June 05, 2007 12:37:00 AM

QuiltingFitzy said…
Sorry this has happened Nancy, not fun.

Mrs. Goodneedle said…
This is scary stuff and your feelings are real, con or not, they're not something you can ignore. The letter you can.
Wednesday, June 06, 2007 6:08:00 AM

Susan said…
Sad, if it's a true case. I wonder if there's any way to check it out. Of course, if he's served 13 years already, it was more than a little of this and a little of that!

The problem is that, while some of the men, and I suppose women, are just kids gone wrong, still savable, many are not.

Paul is doing very well these days. He has a girlfriend who is on the right track, they go to church together, he prays about guidance for his life, he has a good job, though hard labor - repairing those wooden pallets warehouses use - and he's finally given up on Jill - best news of all!
Thursday, June 07, 2007 7:35:00 PM

Laurie said…
When you volunteer in prison in my state, you're required to go through training on recognizing and avoiding manipulation. Not all prisoners are manipulators, but the behavior is far more prevalent in prisoners than in the general population.

Yes, this person is lonely, and I feel for that. But he is also attempting to get you to engage in the behavior he wants you to engage in -- i.e. to respond to him, hopefully with sympathy. The "overshare" is an attempt to engage your emotions. He wants to develop a relationship of some sort. From there, there's a chance that it would go to, "Let me call you collect." Or, "I can't even afford a candy bar when they pay me 37 cents an hour," subtly encouraging you to send money...

It's sad -- I feel for the lonely and disenfranchised also. But you're right to ignore this. And if he were to contact you again, be sure to contact the prison and have them put a stop to it.
Tuesday, June 12, 2007 1:03:00 AM